Unus Safardiar’s track record boasts a sizeable number of experimental projects, including even a dance production. And yet he is acclaimed first and foremost as the creator of highly original and incredibly inventive sculptures, always crafted with the aid of new technologies. Every day, thousands upon thousands of people slow down to take a closer look at his works, be it a horseman dashing into a block of glass in the Novosibirsk Airport or giants slumbering inside luminous sarcophagi in one of the Moscow-City high-rises, their lethargic calm seemingly appeasing the office workers that inhabit the building.

This exhibition is yet another experiment for the artist, an attempt to present to the viewer not so much individual characters, narratives or aesthetic forms, but rather certain dynamic states. Unus weaves them from countless tiny details every one of which deserves to be contemplated separately. What is most valuable about them, though, is that neither shows off its individuality, blending instead with the others to create a single immersive stream in which the amalgamation of the real and the imaginary blurs the line between materiality and virtuality. The process starts to absorb the viewers, locking them in its smooth pulsations, like an apparition.

Contemporary physical science uses the concept of spacetime to imply that time and space are closely interlinked. Concurrently, there is a popular notion that time as such does not exist and was invented by mankind only to better make sense of its environment. Unus Safardiar apparently subscribes to a different point of view: for him, time (integral to movement and change) is tangible, fundamental, and scarcely ever needs space. The artist sees the outer and the inner times as two parallel worlds. The conventional outer time is represented by the streams of galloping warriors, fluttering butterflies, and impossible engineering structures hurtling in an unknown direction. The perceived inner time finds expression in the ever-changing vision of a girl growing younger and older before our very eyes. These transformations are smooth and subtle, at times hardly perceptible, as if it were not the girl or her age that changed but her state of mind instead. An inner state has no form, meaning that its changes can be recognised only by someone experiencing it.

The knights and birds brush past the girl without interacting with her, leaving her to exist on her own. What are these visions – her dreams, or daydreams maybe? Fragments of memories? Has she invented them, or, contrariwise, is she the product of these dreams? Don’t expect answers to these questions. Each question creates a dynamic situation; each answer is a little death, a case closed, a fall of a virtual guillotine. In order to spur life on, sometimes it is essential to ask less questions and simply observe. To someone in the right inner state answers often come of their own accord.

In his Civilization and Its Discontents, Sigmund Freud muses on the nature of religious feeling developed by humans as a kind of protective armour allowing one to embrace life. Freud himself was unable to experience the ‘oceanic’ feeling of eternity present in religious people. This feeling is derived from a successful integration into the world around us. It can be experienced to the fullest only by infants who have never felt fear and thus have no need for protective barriers, absorbing everything as it is. Some speculate that complete trust in the world is a weak person’s response to his or her vulnerability, testifying to the desire to become part of something greater and more powerful; others maintain that the ability to fully accept reality is, if anything, an indication of moral courage. In any case, the more one analyses events, the harder it is to preserve the feeling of integrity, continuity, and coherence: after all, to analyse is always to split.

Unus Safardiar is moving in the opposite direction, towards synthesis. For him, everything is interconnected and happens for a reason. A butterfly sitting on a flower transforms into an appalling chimera, but if we closely observe the process of transformation the chimera will not seem so disgusting simply because we will continue to see the butterfly in it. From now on, looking at other butterflies, we will discern their inner chimeras, too. Every detail passing behind the girl in the panoramic video in a kind of a free association flow is part of her portrait, corresponding to her past or future inner states. This complex portrait is indeed mesmerising: nothing here is beautiful or ugly, good or evil, real or imaginary, everything is of one and the same nature. An eagle turns into a butterfly, a peacock into a wolf, while steel begins to melt. The only constant thing is the smile of the main female protagonist – the smile of a human being who has opened the floodgates to let in the ‘oceanic feeling.’ The waves of this ‘ocean’ are heading into the realm of the omnipotent time which preserves everything, thereby cancelling death. The only thing present in that realm is the endless flow of changing inner states. 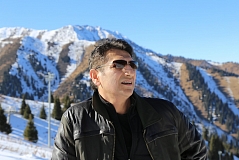 Unus Safardiar was born in Samarkand (Uzbekistan) and was fascinated with the arts since early on. At the age of 13 he was enrolled at the boarding school for gifted children in Tashkent and began his journey as an artist. In 1984, Unus entered the Repin Institute of Painting, Sculpture and Architecture in Leningrad. The years spent studying not only honed Safardiar’s professional skills but also led to an internship in the UK. Upon graduation the artist returned to London where he lives and works now. Unus Safardiar’s creations can be found in museums and private collections the world over, including St. Petersburg, NYC, Florida, and London. His monumental sculptures have also been installed in landmark public spaces, including the Tolmachyovo Airport in Novosibirsk and one of the Moscow-City high-rises.