Erarta Museum of Contemporary Art presents an exhibition by Tatiana Mikhailik. Nonobjective Reality takes the viewer on a journey into the artist’s metaphysical mirror-world

The subdued contemplative paintings by the Moscow based artist Tatiana Mikhailik reveal a pointedly subjective reality. For more than four decades, this contemporary painter has been travelling through time and space, as if living in several epochs simultaneously, from Renaissance up to the present day. No matter which times and cultures her artworks allude to, each of them is akin to an inner self-portrait that transpires through the images of flowers, birds, fruit, and other refined fragments of being.

Tatiana Mikhailik describes her creative method thus: ‘Humans are simultaneously witnesses of and parties to their own reality, multilayered and multidimensional. To study and explore it as best one can is both a pleasure and a professional interest. This makes up the entirety of my world and my every day . . . I seek to visualise the common ground between different cultures, events, and emotional states. Art is always subjective. One only needs to watch and observe, to challenge stereotypes until it becomes clear that various events, layers, and interrelations fit together to yield the solution. The most valuable thing about such deliberation is how everything is joined in the unjoinable. To me it is like a game. A brief moment in which the sense of reality emerges. This moment can become a picture which I sometimes struggle to explain.’

Tatiana Mikhailik’s artworks, rich in cultural references and personal associations and describing the events of a person’s inner life, also contain something that needs to be more felt than understood. Some poignant mystery seems to be present in them. The artist’s paintings are not just more or less expertly organised visual objects based on the interaction between different parts of what is depicted, on the play of angles and compositional inversions. Neither are they merely painted collages combining diverse plains, colours, and symbols, but rather more like pages out of a poeticised inner biography transcending the current daily grind. Some of Tatiana Mikhailik’s canvases were inspired by the early music and literature of the classical antiquity and the Middle Ages. However, far from being illustrative, her artworks are more about an ability to live in many eras at once, visualising the evolving poetic imagery. Paintings featuring intricate compositions and outwardly cryptic meanings are displayed next to more ‘direct’ visuals: here a woman’s portrait from the 1600s or symbolic objects of the traditional Japanese culture, there an Ancient Greek-looking bunch of grapes or Baroque-like sumptuousness of flower bouquets. All these images and fragments form a kind of a jigsaw puzzle representing the inner life of an artist trapped in the modern time. 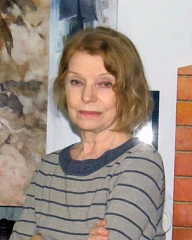 about the artist
An established professional and member of the Artists’ Union since 1980, Tatiana Mikhailik took part in the Sotheby's, Phillips, de Pury & Luxembourg, and Christie’s charity auctions. He works were exhibited in Paris, Barcelona, Brussels, Frankfurt, Athens, and Basel, and were acquired for museum and private collections worldwide.