Anna Osipova is a contemporary Yakutian artist whose trademark style borders on Magical Realism. Although formal academic training has an obvious bearing on her figurative paintings, they are a world away from both conventional Realism and mainstream folklore illustrations. Osipova’s art teems with archaic Eurasian imagery and visions inspired by Turkic mythology and Tengrism that storm into present-day reality and in turn acquire modern aspects. One gets the impression that the artist lives in all epochs at once, travelling freely between the Upper, the Middle, and the Lower Worlds, but favouring the Middle one we live in, wherein all powers clash and all times intertwine, with the past validating the present and safeguarding the future.

The exhibition features more than twenty paintings, mostly large-scale canvases from the recent years created in Siberia and later brought to St. Petersburg. The most important pieces include the nearly five-metre-long Umay triptych celebrating the ancient Turkic and Mongolian goddess of femininity, as well as the artwork titled Depths symbolising historical time layers. 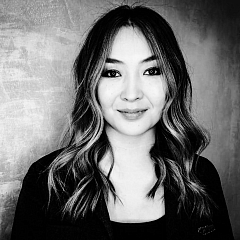 Anna Osipova was born in Yakutsk in 1976. After studying at the Yakutsk Art College and the Far Eastern State Academy of Arts in Vladivostok, from 2009 to 2013 she completed a course at the creative workshops of the Regional Branch of the Russian Academy of Arts for the Ural Region, Siberia and Far East in Krasnoyarsk under the supervision of member of the Academy of Arts Anatoliy Levitin. In 2007, Anna joined the Artists’ Union. Anna Osipova was awarded the diploma of the Russian Academy of Arts and received awards and prizes at a number of young artists’ shows and other local and international exhibitions. Her works are in the collections of the National Art Museum of the Sakha (Yakutia) Republic, Vasiliy Surikov Krasnoyarsk Art Museum, as well as in private collections in Germany, France, United States, China, Canada, Israel, Estonia, and Russia.