Alexander Yakovlev
In the Beginning Were Letters

Alexander Yakovlev’s style is often described as abstract calligraphy. His characters tend to turn into arabesques, while the colourful background and splashes of paint round off the picture. The artist himself does not categorise his works as calligraphic: to him, these are drawings containing letters. Indeed, they are closer to the artistic practice known as lettering, wherein characters are drawn rather than written, resembling a pattern produced in a particular style.

Yakovlev’s art is deeply intuitive. His works derive from a finely honed skill allowing the hand to summon new meanings while writing the alphabet, individual words, or quotes from Joseph Brodsky’s poems.

In the throes of creation the artist would use anything that comes to hand, from brush to putty knife. However, most of the pieces showcased in the exhibition were drawn with a fountain pen – the kind that was widely used before ballpoint pens became common, albeit with a wide flat nib instead of a pointed one. Yakovlev’s desk is crammed with countless jars containing the various materials he draws with: watercolours, inks, and even leftover paints given to him by his neighbours and fellow villagers who are well aware that the artist will put them to good use.

Numerous studies conducted in Japan and China addressed the effects of practising calligraphy on the physical and psychological health of focus groups, from restless children to elderly patients with Alzheimer’s disease. In addition to motor cortices, writing by hand also activates speech areas of the cerebral cortex, improving fine motor skills and facilitating learning since the ability to focus is beneficial for memory. Perhaps this is the reason why calligraphers usually live – and stay lucid – longer. The Chinese and Japanese hi-tech companies actively encourage calligraphy studies among their employees. How often do you write letters by hand? We hope that this show inspires you to try calligraphy, too. 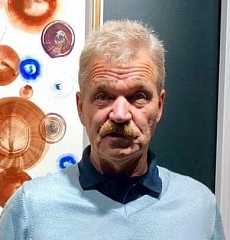 about the artist
Alexander Yakovlev was born on 25 May 1956 in Lahdenpohja, Republic of Karelia, and graduated successively from the Krasnodar Art College and the School of Graphic Arts of the Kuban State University. His artworks were featured in Leonid Pronenko’s book Calligraphy for All and can be found in private and corporate collections in Russia and internationally.
share
current exhibitions
all exhibitions