The heroic epoch of ancient Greek myths and gladiators saw a glorious revival in the sunset glow of the 1980s and 90s Hollywood film screens. Painter Andrey Kartashov uses the image of Arnold Schwarzenegger to eulogise the last hero of the age of patriarchal masculinity not yet trampled upon by the iron high heel of feminism.

Boasting the most perfect body the world has ever seen and wise with experience, the ‘Austrian Oak’ has long since abandoned the cult of physical perfection in favour of environmental and vegetarian advocacy. In each of Kartashov’s canvases, he tells a new parable, here in the guise of Sisyphus rolling a boulder to the top of his powers, there as Don Quixote fighting for the green energy of wind turbines. According to the artist’s private mythology, Schwarzenegger brought bodybuilding to his contemporaries just like Virgin Mary brought her child from the celestial realm to our mortal vale.

At 15, Andrey began pumping iron and simultaneously studying art in the beautiful Transcarpathian city of Uzhgorod. Set on being the winner, he moved to St. Petersburg and enrolled at the Academy of Arts, continuing to perfect the architecture of his body while honing his anatomical drawing skills. His further creative journey took him to China and the US where he tangibly succeeded in upholding the Ancient Greek principle of kalokagathia, the striving for a harmonious combination of one’s bodily, intellectual, and spiritual virtues. In our days, this ideal has been replaced by the cult of the natural, also known as body positivity.

The Last Titan is a statement focusing not so much on an individual as on his time; or, more accurately, on the juncture of times when old heroes leave and give way to new ones. The artist believes that this cultural phenomenon is cyclical: ‘A reality only recently capable of triumphant embodiment, a hymn to physicality is sinking to the bottom, slowly being buried under a layer of the consumer society’s debris and digital rust . . .’

Andrey Kartashov was nicknamed Terminartist, a portmanteau of artist and the Terminator. This looks like an ironic twist on perfectionism, obsession with art, and incongruence with the stereotypical bohemian image. Could the achievism and muscular armour be merely a vulnerable soul’s protection against the world’s imperfections?

James Cameron’s directorial genius very aptly casted Arnold Schwarzenegger as a soulless machine executing its programme. This can also serve as a metaphor for a perfectionist’s ambition to get past oneself at any cost and be the best in everything: to roll one’s boulder to the top giving the losers a contemptuous look through sunglasses. Up until the yearly 2000s, the Terminator remained a very significant cultural icon, being vastly different from the standard mythological characters who have their ups and downs and achieve immortality through their feats.

Arnold Schwarzenegger’s success culminated in his political career, in particular, the two terms he had served as the governor of California. Having had a good laugh at his former typecasting as a macho superhero in a number of late-1990s comedies, the actor attempted to make a valuable contribution to the society. As head of the government of one of the largest and most advanced American states, he, like the Terminator, assumed responsibility for its future, bringing to bear his skills of self-discipline and self-control.

This series of events can be traced in Andrey Kartashov’s paintings making a nod to the century-old Vienna Secession style. At the same time, they also have a more profound, universal appeal. Even though the currently trending hero is more likely to be a defiant loser like Icarus while all glory is reserved for modern-day Dianas, Athenas, and other divine warrioresses, the testosterone titans pushed to the bottom of mass culture will be back someday. 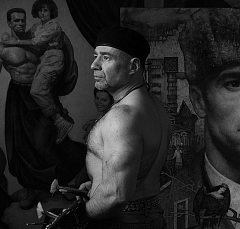 about the artist
Andrey Kartashov successively graduated from the Transcarpathian Art Academy’s Adalbert Erdeli Professional Art College in Uzhgorod and the Painting Department of the Ilya Repin St. Petersburg Academy of Arts. In 2007, he joined the Portrait Society of America (PSA), an in 2016, the Artists’ Union of Russia. His paintings are in the collections of the Museum of the Russian Academy of Arts in St. Petersburg, Tianjin Museum and Liu Haisu Art Museum in China, Arnold Schwarzenegger Museum in Austria, as well as in private collections in Russia, UK, US, China, Ukraine, Poland, France, and the Netherlands.
buy a ticket