Sasha Sokolova
Under the Sunbeams

Sasha Sokolova confides that having a private swimming pool was her childhood dream. Once this dream came true at her summer cottage near Moscow, Sasha began a series of paintings entitled Splash. With this series, the artist sought to blend abstraction with the realistic manner she had learned from her grandfather. The latter, a WWII veteran Yuri Oparin, taught her drawing since early childhood. As a young adult, Sasha would spend three years working on another series, 364 Days, portraying war veterans and illustrating their daily lives – inspired by and dedicated to her grandpa.

The Splash series sees meticulously detailed and delicate female bodies blend in with stylised backgrounds. The girls seem to diffuse in the abstraction of sunlight, water, and lightness of being. The artist’s style is aloof and pointedly devoid of psychologism. The viewers see no facial expressions: the female protagonists either turn away or wear sunglasses to hide their eyes. Painting herself, her friends, and a younger sister for the series, Sokolova provides a visual expression to the currently trending notion of ‘being in the moment,’ that is, here and now, free from all unnecessary thoughts. Somewhat similar scenes of modern high life were painted by David Hockney. Having moved from the UK to California in the mid-1960s, Hockney was impressed by the luxury of its sunlit homes complete with private lawns and pools. His series of paintings depicting swimming pools is now a cult classic.

Sokolova’s Life Still series amalgamates female nudes and plants. Its title is a pun on the traditional still life. For the artist, nudity and tricky angles proved to be a test in both female and plant anatomy. While Sasha herself posed for these pictures, floral elements remain centre stage here, with the human body merely providing the backdrop. Human gaze sweeps admiringly across the plants killed by human hand.

Sasha Sokolova’s paintings convey the sense of archetypal joy roused by Mother Nature. The artist enthusiastically loses herself in the picture, turning into sunlight, water or flower; the portraits she paints evoke landscapes. ‘The longing for Paradise is man’s longing not to be man,’ claimed Milan Kundera.

Sasha Sokolova’s exhibition was programmed through the feedback form on the museum’s website. Erarta offers the artists working in various genres and media an opportunity to reach out to their viewers, introducing its visitors to highly original artworks. 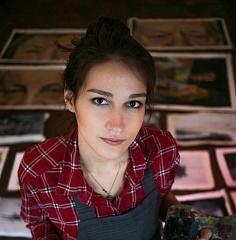 about the artist
Sasha Sokolova was born in Moscow into an artistic family: her father is a professional photographer, while grandfather was a painter. Sasha graduated from the Film Design Department of the Gerasimov Institute of Cinematography. Here artworks were exhibited in Russia, Poland, Germany, and Spain. In 2017, Sokolova became Russia’s only artist to join the production team of Loving Vincent, the first fully painted animated feature film in history.
buy a ticket