This winter Erarta Museum presented an extraordinary exhibition by the contemporary French artist Cécile Plaisance, featuring not only photographs but the visually stunning medium of hologram

This will be the first ever time Plaisance’s art will be exhibited in Russia, culminating in one of the most encompassing shows of the artist to date. Her works explore the notions of the different roles that we play both privately and publicly and the way others perceive us on autopilot, relying on stereotypes and snap judgements; often from peculiar or restrictive vantage points. To further immerse the viewer in this aspect of Cécile Plaisance’s works, Erarta will assemble a ‘Peep Show’ environment within its exhibition halls, which will see visitors peering through gaps of a carefully constructed labyrinth. Moving through the corridors, the visitor will be able to spy on embracing couples, undressed dolls and startling scenes, guaranteeing their visit to be an unmissable experience.

Initially Cécile Plaisance gained the attention within the art world through her ‘Barbie’ series, a number of which will be featured in the exhibition at Erarta. As the artist herself explains, when she was first becoming acquainted with photography and Photoshop she was very much inspired by the posed works of Helmut Newton. Thus, Plaisance decided to incorporate the figure of the Barbie instead of a model, borrowing the doll from her daughter. Consequently, Plaisance employed Barbie in different types of series- the dolls were posed as if they were real women on holiday; on yachts; about to board a helicopter and posing on the covers of various magazines. At times, the dolls are so perfectly integrated into their environment that the line between reality and fantasy is blurred, making one question whether these are dolls playing the role of a female model in a particular shot; or real women playing the role of glamorous dolls with such conviction that others see them precisely as such.

Typically, dolls are used metaphorically for staging certain events, acting out various scenarios which allow children to engage in an imaginary world; aiding in their creative and intellectual development. Manufacturers typically designate jobs or roles to these dolls, such as Baywatch Barbie (lifeguard) or GI Joe (military/marines). This begs the question to what extent we as children assign roles to the dolls we play with as opposed to being influenced, or even programmed, by these same dolls via the industry that has created them, which are habitually superficial, gendered and completely without context. Barbies are customarily played by girls globally, but the doll has recently been viewed in a controversial light, as not only does it portray a completely unrealistic body image standard, but additionally Barbie was only seen to play perfunctory roles relegated to pre-feminist times.

Still inspired by the works of Newton as well as Michael Dweck and Richard Avedon and with the realization of certain limitations of using Barbies, Plaisance went on to use live models for her shoots. However, a single image did not prove the ideal means to convey the message of the complex and multifarious nature of women. Thus, as an ode to femininity, as well as the artist’s wish to show that ‘beyond differences in clothes, culture and lifestyleswomen aspire to live their multiple lives fully and intensely’, Plaisance started using holograms or lenticular lens form as her predominant medium. Lenticular printing is a technique that makes it possible to superimpose two images in order to obtain, for example, a dressed/undressed effect. With this new form of medium Plaisance is able to explore the numerous facets of being a woman; from how one sees oneself in opposition to how others see you; the public persona that you strive to create, whilst containing your inner secrets and desires. 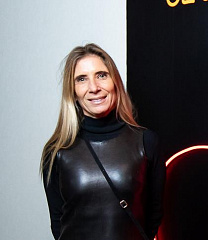 about the artist
This will be the first time Cécile Plaisance’s works are exhibited in Russia. After working on the European Financial markets for 10 years and then in the media, Plaisance started to pursue her true passion- photography, when she settled in Brussels in 2008. Upon graduating from Contrast Art School with a focus upon photography and Photoshop, she received critical acclaim for her end-of-year exhibition. Since, she has been scholastically well received, as Cécile Plaisance’s portfolio won first prize in Photo Magazine’s 2018 competition. Furthermore, she has gained commercial success as well, as her works are part of a number of important collections, from the King of Morocco to the collection of Jo Malone, CEO of her eponymous brand, to name only a few.