Evgeniy Gorokhovsky
Between Light and Shadow

Erarta Museum of Contemporary Art presents an exhibition by Evgeniy Gorokhovsky, an artist whose creative universe lies beyond perfunctory trends and news of the day

The renowned Russian painter Evgeniy Gorokhovsky was a second-generation artist. His father, Eduard Gorokhovsky, was a recognised master of the Moscow Romantic Conceptualism. Evgeniy, on his part, became one of the founders of the Russian Photorealism, having given this genre a metaphysical and contemplative dimension.

The artist was born in Odessa, grew up in Novosibirsk, and studied in Moscow, where he subsequently worked and spent most of his life. His artistic journey began on fertile ground, amid such masterminds of the Soviet unofficial art as Ilya Kabakov, Victor Pivovarov, Erik Bulatov, and Oleg Vasilyev. Evgeniy was also greatly influenced by the Eastern philosophy and esotericism.

Photography, described by Gorokhovsky as a ‘reality quote,’ was the point of departure for his artistic practice. The accent, however, was made not so much on achieving photographic semblance by means of painting, or even on the social and cultural aspects of the image as on some transcendent realm. Out of hundreds of snapshots the artist would select those that, according to him, ‘signalled their presence,’ revealed a special energetic structure. Gorokhovsky believed that his goal lied in unveiling the ‘secret meanings hidden behind photographic images.’

The inner subject of many of his artworks is the discovery of the metaphysical principle inherent in the images of physical world and accentuation of this principle with special symbols, signs, and geometric patterns. The ornamental geometry embedded in the pictures seems to remind us of a universal harmony present in this sad world, of the rational nature of existence according to the initial design. The subject matter of these paintings is no longer perceived as mundane reality, but rather as a series of mesmerising emblematic visions. Evgeniy Gorokhovsky created an artistic world of his own, complete with its own imagery, style, themes, and characteristic intonation. His art is full of nostalgic yearning for heavens, harmony, and meaning. 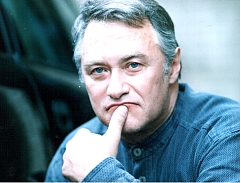 about the artist
Evgeniy Gorokhovsky (1951–2021) was born in Odessa into a family of architecture students. Growing up in Novosibirsk where his family had moved in 1954, he took up drawing when he was 11. In 1968–1973, Evgeniy studied stage design at the Moscow Art Theatre School, subsequently creating stage sets for 58 theatre performances all across the country. Starting from 2014, the artist lived and worked between Moscow and Seville (Spain), exhibiting his art in solo and group shows in Russia, US, Japan, Germany, Austria, France, Spain, and other countries. Gorokhovsky’s paintings are housed in the permanent collections of the State Tretyakov Gallery, Cinema Museum, and Alexey Bakhrushin State Theatre Museum in Moscow, Novosibirsk State Art Museum, as well as Villa Haiss Contemporary Art Museum (Stuttgart, Germany), the Kupferstich-Kabinett (Dresden, Germany), and Jane Voorhees Zimmerli Art Museum at Rutgers University (New Brunswick, New Jersey, USA).
buy a ticket