Erarta Museum presented an exhibition by Gabriel Wickbold, one of the most influential Brazilian photographers of today. Standing to his credit are appearances at Paris Photo and Xposure art fairs, a collaboration with BMW, exhibitions all across the globe, and GQ magazine’s Men of the Year award

During science lessons at school we were all told that moving matter is the only thing that exists in the world. Hardly realising what this meant, we never questioned this statement, and simply repeated it over and over again, accepting science in good faith. Those who chose the path of faith ascribed any law to God’s providence, but moulded their gods in their own likeness, investing divine actions with human logic. Diehard materialists instructed us to deify natural selection as nature’s way of perfecting itself, all the while claiming that things in which they saw certain patterns were occurring randomly. These intricacies drove people with a propensity for critical thinking to conclude that materialism is no more different from idealism, and atheism no more different from religion, than dreaming is from waking: the only difference is the starting point which not only sets the direction but also contains an answer to the core question. Should one be surprised then that, having travelled the challenging path we call learning, whereon our principal task was to accumulate facts corroborating the worldview we’ve been offered and rebutting anything that did not fit into it, we found ourselves exactly where we had started, with facts gathered along the way not making us any happier? Is there a path of knowledge based on community and likeness rather than on opposition and negation, one that would not require seeing the world as ‘us’ vs. ‘them,’ thereby diminishing our chances of finding happiness?

‘Of course there is,’ religious people would say. ‘We are all children of God and equal before Him.’ The only problem, however, is that everyone has a god of their own. Scholars might cite topology, a branch of science that deems any objects that can be turned into one another through continuous non-destructive deformation to be similar or homeomorphic, implying a lack of substantial difference between them. According to topology, a coffee mug is not significantly different from a doughnut, and the notion of distance is irrelevant – this approach alone is worthy of a philosophical discussion!

In their search for similarity, artists have progressed even further than scientists, which is hardly surprising: in a realm where form can determine substance, any differences between the outward and the inward are negated, opposites do not necessarily cancel each other out, and everything is a manifestation of a single continuous transformation. In this miraculous homeomorphic world, man can turn into grass or a fallen leaf, his hair can transform into a sheaf of ripe wheat, and exotic orchids can start blooming on his forehead, just like in Gabriel Wickbold’s works. The artist clearly demonstrates that the Universe is neither centripetal nor centrifugal, man is not the pinnacle of creation, neither cause nor effect, but rather a tiny loop in the global cobweb, no more special than a bunch of fresh bananas or an aged lichen. We are thus offered a glimpse into a world free of such problems as mortality, struggle for existence, or the need to prove one’s uniqueness and soundness. Wickbold’s characters lead the life of watermarks visible on a sheet of paper – not devoid of their own meaning, but clearly secondary to paper of which they are an integral part. A journey through the photographer’s creative universe validates what we have been taught at school: matter is indeed the only thing that exists in the world, and this matter is one and undivided, eternal and yet perpetually changing. There’s nothing excessive about it, it is neither dead nor alive, it has no distances. And if matter is one and we are all part of it, then we are merely different forms of one another.

For the artist it is not a revelation but a given: we are not our own, we are part of the cosmos. In Gabriel Wickbold’s cosmos, everything is in motion, prompting the viewer to join in the kaleidoscopic action and giving one the impression of being pierced with cosmic filaments and enveloped by voids like the characters featured in these images are. We feel that we can transform into stars, turn into emptiness or light. We can become all that simultaneously. Surrounding us are countless stars and celestial bodies that are just like us; near and far, we are all interconnected. After a short while we realise that instead of being pierced by rays of light we emerge from their constellations. Born out of a single energy field, we are but a transformation of the collective star matter. Those who are not afraid to follow the artist one step further might even discover that they are one and the same person with everyone around them.

The magical matter visibly rendered in Gabriel Wickbold’s numerous works offers the viewer a rare chance to experience the epiphany of belonging to a single whole – one only needs to realise that a coffee mug is no different from a doughnut. 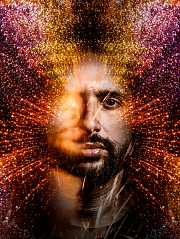 about the artist
Gabriel Wickbold was born in 1984 in Rio de Janeiro. After initial experiments with music and poetry, he found his true creative voice as an art photographer. In 2020, Gabriel became the youngest artist to have a solo exhibition at the Museum of Brazilian Art of the Armando Alvares Penteado Foundation (MAB FAAP). His collaboration with BMW not only led to the creation of several art cars but saw him design the company’s Paris concept store. The artist took part in high-profile art fairs in Brazil, US, and the UAE and exhibited his art in solo shows around the globe, including São Paulo, NYC, Stockholm, Lisbon, Miami, and other cities.