Erarta Museum presented an exhibition by Boris Smotrov, an artist in constant search for a certain visual code of Russianness telling the viewer a tale of the Golden Age

Boris Smotrov’s artistic journey began in the 1960s — the years of a cultural and economic boom, the time of great expectations and achievements, and, not least important, the period when the legacy of the early 20th century Russian avant-garde came to be truly appreciated. It is now a statistical fact that, of all the times in the history of the Russian art spanning over a millennium, the avant-garde achieved the greatest international recognition. In Boris Smotrov’s formative years this movement was not just an awe-inspiring and inspirational discovery, but a valid alternative to Socialist realism and all the dominant and inveterate Soviet art. Young artists yearned to go ‘back to the future’, return to the avant-garde practices and pick up the baton of modern art whose advancement was interrupted by the totalitarian regime. This gave rise to the unique phenomenon of the second Russian avant-garde which, although initially belonging to unofficial non-conformist art, did not, unlike Sots Art, have any political agenda, focusing instead on the metaphysics of the artistic form and searching for an expressive visual language based on the formal, figurative and colouristic findings of the early-20th-century artists.

Boris Smotrov’s individual manner shows a departure from the second Russian avant-garde canon. The artist chose his own path, and this steady progress towards avant-garde, towards its folk and carnival aspects rather than reincarnation or even verbatim replication half a century later, is what makes Smotrov’s painting style unique. The artist seemingly tries to find a certain visual code of Russianness looking beyond the actual historical time and entering a conventionalised bucolic realm. Here country landscapes and peasants not yet stripped of their identity and zest are painted in a bright ornamental style with a kind of vaguely futuristic touch that makes one absorb and accept this joyful theatre which so boldly mixes various symbols and images of the Russian culture — from Venetsianov to Kustodiev, and from icon painting to Malevitch.

The artist’s works seem to be infused with the long-forgotten energy of folk art and folk festivals. Solid, bright, saturated local colours, simplified form, nearly poster-like clarity of composition (poster art is the artist’s other favourite medium besides painting), and themes inspired by the agricultural calendar  — haymaking, harvesting, choir singing, and festive merrymaking— lend these artworks a touch of the archetypical, a visual formula of the Russian folk universe in its fairy-tale or epic version. Smotrov’s paintings are rooted deep in the associative field of cultural references: drawing us into the game of spotting semantic parallels, guessing hidden quotations and visual rhymes, it lets in the refreshing air of a joyous utopia. Looking through a spyglass or a kaleidoscope tube — which of the two we are not sure — we see a tale of the Golden Age. 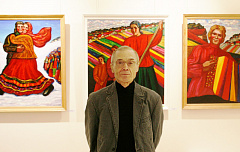 Despite being an established artist, Boris Smotrov never rests on his past successes and continuously hones his artistic craft. Since the 1980s, he has been actively exhibiting in Paris, New York, New Jersey, Seoul, Harbin, Vienna, as well as in various Russian museums. In 1996, Boris Smotrov was awarded the Grand Prix at the Golden Brush National exhibition/competition held at the Central House of Artists (Moscow).