Igor Oleynikov. The Hunting of the Snark

Igor Oleynikov’s creative practice is firmly rooted in the world of childhood: his track record includes many years at the Soyuzmultfilm animation studio, illustrations to dozens of bestsellers, including the cult Soviet guide to the digital universe I’ve Been to the Computer City by Andrey Zaretsky and Alexander Trukhanov, as well as all sorts of professional recognitions, including the Hans Christian Andersen Award. Having been commissioned to illustrate Lewis Carroll’s mysterious poem The Hunting of the Snark, Oleynikov made the only feasible choice, jettisoning everything that was known about this extensively studied text and went his own way, reaching out to an older, well-versed readership.

In Carroll’s poem, in which the main character is named but never makes an appearance and the reader finds hardly anything to hold on to apart from the rhythm, the illustrator managed to discern gloomy rain-soaked visions of the post-war UK evocative of dystopian novels. Here, all social activity is thoroughly militarised, and the narrative is rendered as a visual memoir of the Beaver – one of the poem’s protagonists – presumably retired from a high army rank (needless to say, the original text contains nothing of the kind). Oleynikov admits that poetry is the most rewarding thing to illustrate: taking only one line as a point of departure, it is possible to construct an entirely independent creative world, which is exactly what the illustrator did in this case, using free associations to arrive at a kind of a Gothic version of the Yellow Submarine animated film.

Illustrating Carroll’s absurdist odyssey in the most popular Russian translation by Grigory Kruzhkov, the artist did not bother to inquire into what exactly is going on here: instead, he organised his own Snark-hunting expedition, making sure to stock up his submarine with green apples and the Enigma cipher machine. The translator and the illustrator find the right imagery and redefine the old concepts, which is exactly why Oleynikov’s visual translation alongside Kruzhkov’s poetic one present a unique opportunity to gain a new perspective on the creation of the great master of nonsense. 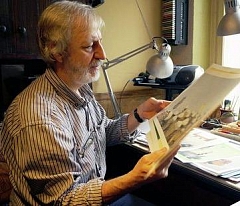 Igor Oleynikov was born in Lyubertsy, Moscow Oblast, in 1953. Having graduated from the Moscow Institute of Chemical Engineering in 1976, he spent several years as an engineer at a design bureau. The artist currently resides in Moscow.

Since 1979, Oleynikov has been professionally involved with the Soyuzmultfilm animation studio, contributing to such iconic productions as The Mystery of the Third Planet, Once upon a Dog, Caliph Stork, Journey of the Ant, Martynko, and others as assistant production designer. From 1991 through 2000, he worked as production engineer at Christmas Films studio. That decade also saw the beginning of Igor Oleynikov’s collaboration with the publishers of children’s books and periodicals – to date he has illustrated more than 70 publications, mostly for the younger audience, issued in Russia and abroad. Oleynikov was awarded the Book Review newspaper’s Person of the Book prize in 2011 and received the diploma of the Hans Christian Andersen Award in 2012.