Stefano Bombardieri.
The Boy and the Elephant

An old man who remembered a lot and forgot even more once described an easy way to envision Omniscience. One only needs to ask oneself how many objects one can observe at a time without counting them. One? Well, naturally, there’s not much to count. Two – basically the same. That also goes for three. But with four and five, one can’t help counting. No matter how fast it happens, our brain does the calculation. ‘As soon as you manage to hold a million things in your mind without counting them, Omniscience will dawn on you,’ laughed the old man.

The Boy and the Elephant exhibition is exactly about the possibility of Omniscience. When we were little, our world was huge and lacked any rankings; we did not categorise things into friends and foes, important and unimportant, primary and secondary, and did not sort the wheat from the chaff. The world appeared whole and undivided, there was nothing to count in it: the world was ONE. We took everything for what it was, questioning nothing and not casting off things we would later find useless or obscure: it takes some time for the kid to become a sculptor, chiselling away the superfluous material from the marble block to reveal his or her own creation – at the beginning the marble block was a source of joy in itself, and it didn’t occur to us to ruin it.

Each time we ask ourselves ‘Could that be real?’ our world grows tinier and tinier. Doubt helps us find solutions, but narrows the search. Leave your doubts at the entrance to this exhibition and for a little while imagine that anything is possible. Gape at the gigantic animals and feel small again. These giants somehow resemble someone’s luggage left in the transit area, as if suspended between sky and earth. Or between dreaming and waking. Or between man and nature – depending on your preferred vacation style. Be as it may, don’t overlook the supervisor of this zoological lost and found – he is in charge here, no matter how little: it is this little kid who puts everything in place. Right now he is busy installing the exhibition: you can watch him hoist up an elephant. How does he manage to do that? Who gave him permission? The thing is, he didn’t ask for one: he did not start to play the adults’ games, and stupid questions do not cross his mind yet.

We have no recollection of ourselves from the time when we knew no doubts. Would you like to try to return to that starting point, to envisage yourself in the prehistoric cave of your consciousness, back when your knowledge did not yet begin to increase your sorrow? Inside that cave, darkness conceals no boundaries: they simply do not exist. You are surrounded by rhinoceros: they stick out of the walls and drop down on you from the ceiling. In a little while you get an impression that there is no one here but rhinos, that everyone present is a rhino: some, like the nimble beetles, have already procured a horn; others, like the ostrich, are still searching for it, and that explains why the ostrich has stuck its head in the Rubik’s cube. ‘What about the monkey?’ one has every reason to ask. ‘Is it not a monkey, after all?’ Look, stop asking questions: this cave has different rules of the game. Try to accept as a given that the monkey is also a rhino. More than that, imagine yourself belonging to the family of rhinoceros. Or, more correctly, of unicorns.

Do you know how unicorns were pictured back in the old times, before they assumed a horselike appearance? 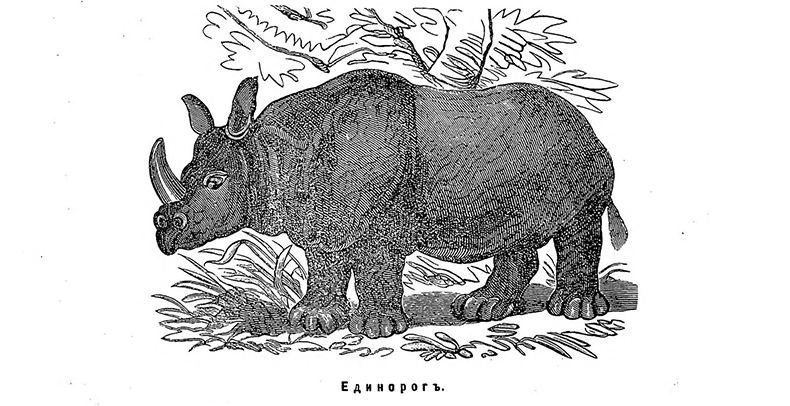 Unicorn. Image from the Bible Encyclopaedia of Archimandrite Nicephorus. 1891

Now don’t you worry, being a unicorn is a joy and honour, for unicorns symbolise purity and questing. The subject of everyone’s admiration, the unicorn, according to the legend, was only attacked by the elephant and the lion: the swift unicorn would invariably get the better of the clumsy elephant, while the deft lion beat the unicorn by luring it into a dense forest and avoiding its thrust the moment before the running unicorn sank its horn into a tree. Why do you think the boy is suspending the elephant? Does he wish to turn it into a balloon? Quite possibly so, but most likely the boy wants to keep his rhino friends safe from it: let the elephant hang a little until the exhibition closes and the rhinos retreat to a safe distance. ‘Why would one want to protect the rhinos from the elephant if the elephant is also a rhino, and all of them together are unicorns?’ you might ask. That’s because the elephant is still little and perhaps doesn’t know it yet, would be our rough guess.

‘Okay, then why does the rhino have two horns instead of one as befits a decent fairytale unicorn?’ we expect you to ask next. Well, simply because it’s not a fairytale, and our rhinoceros are real and not imaginary. Or maybe just so that they have a spare one. It is very likely that you, too, have two hands and two feet, and a spare tyre in the trunk of your car. At the end of the day, could it be that the rhinoceros did not become extinct exactly because they had a spare horn, while one would have trouble finding a live unicorn? Nowadays you can only see them on the pages of old books and on faded tapestries. And at this exhibition. And, of course, in the mirror: don’t forget that you’re also a unicorn! Let us spend more time delving into the world of questions that require no definite answers: indeed, every definite answer narrows the realm of imagination, causing a tiny death of a dream.

If at any point you managed to conjure up a dim recollection of something that had happened long ago, like when someone asked you a question to which you didn’t know the answer, or when you were walking in the park and almost got caught in a rain shower, but reached a shelter just in time, or when without a moment’s hesitation you joined a game knowing only a fraction of its rules – and, after many years, lying in bed and nearly drifting off to sleep, you suddenly smiled, recognising the same sensation of gleeful anticipation, – then you must have surely been on the right track to Omniscience, to uniting what happened and what didn’t, the real and the imaginary into a single whole. At that moment, the scattered world became ONE, and you saw it in its entirety.