exhibition
Valeriy Lukka. Mixed Media
all exhibitions
18+
Exhibitions Wing, floor 4
Erarta Museum presented the exhibition by Valeriy Lukka, one of the most prominent figures in the St. Petersburg art scene over the past four decades
/

In the late 1970s, almost in parallel to the emergence of Neo-Expressionism in Germany, the Leningrad Academy of Arts alumni Vyacheslav Mikhailov and Valeriy Lukka teamed up with Felix Volosenkov to jointly search for new means of expression. At the onset of the 1980s, the artistic group continued its quest for new expressive forms, representing a kind of the Leningrad branch of the Neo-Expressionist movement. By the early 1990s, this ‘mighty triad’ was already perceived by the St. Petersburg art community as the three pillars of the new art. Now, several decades later, even though the group has long since split and each of its members, pursuing his own path, has evolved from one of the heralds and pillars of change into a living classic associated with a specific point in the local art history, they still remain a vital force in the contemporary artistic life.

Over the decades, Valeriy Lukka took impressively consistent steps on his creative journey, which now looks whole and complete. After juvenile infatuation with Metaphysical Realism, he ditched ‘smooth’ figurative painting and, already at the beginning of the 1980s, found his own, instantly recognizable voice, perfectly balancing the mental, the visual, and the emotional.

Lukka’s style is eccentric, poetic, ironic, provoking, and ascetic at the same time, having at its core unconventional ideas, methods and gestures, leading to unexpected results. His artworks combine musings, feelings, and opinions concerning time — current, historical, and metaphysical. His paintings turn into a kind of art objects; his Expressionist impulse is projected over social realities, evoking paradoxical metaphors and narratives.

Lukka masterfully handles time and timelessness. The sensation of irreversibility of time and self-destruction of matter is reflected in the very structure of his canvases. The surface of his paintings resembles a landscape where solidified streams of volcanic lava reveal inner tectonic activity, while the inimitable exposed stitches become a crucial element of the composition and the artist’s trademark.

Valeriy Lukka is perhaps the last modernist hero: instead of breeding simulacra and commenting on someone else’s meanings, he creates his own. Believing that art has a mission, he is living in earnest, in the actual finite time, on the very edge of painting over the abyss of trending artistic practices.

The exhibition at Erarta Museum, coinciding with the artist’s 75th anniversary, mostly showcases works from the museum’s permanent collection, with the addition of several new canvases fresh from the studio. Some of them were inspired by the classic antiquity, by visions of Rome and Greece where the artist resides for a part of the year, others by Paris and France, but the majority are rooted in the Leningrad and St. Petersburg of the late 20th and early 21st centuries. 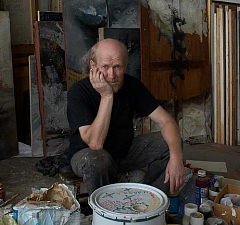 Valeriy Lukka was born in 1945 into a family of Ingrian Finns and spent part of his childhood in a foster home. After studying at a military academy, he was conscripted into the air force and got stationed in Tashkent, Uzbekistan, simultaneously taking up painting. Having served his time in the army, Valeriy returned to Leningrad to continue his studies. In 1977 he graduated from the Repin Institute of Painting, Sculpture and Architecture.Today Valeriy Lukka is a renowned St. Petersburg-based artist, member of the Union of Russian Artists, St. Petersburg Academy of Contemporary Art (SPASI), and International Association of Art Critics (АIСА).

Since 1978, the artist took part in more than 200 exhibitions in Russia and abroad. His artworks were acquired by many Russian and foreign museums, including the State Russian Museum, Erarta Museum of Contemporary Art, State Museum of the History of St. Petersburg, National Pushkin Museum, Museum of Russian Art (Kiev, Ukraine), Zimmerli Art Museum (New Brunswick, USA), as well as by private collectors in Austria, Italy, Poland, Russia, USA, Finland, and other countries.