Sergey Ryazanskiy has been in space twice: first in 2013 as flight engineer, then in 2017 as commander of the Soyuz MS-05 mission. All the more surprising is his confession that the only thing he found unchanged on his second journey were the interiors of the International Space Station. The ISS travels at a speed of 28,000 kilometres per hour, leaving behind nearly 400 metres in a literal blink of an eye. Within the span of every 24 hours spent on the ISS, the astronauts see 16 sunrises and sunsets. It is hardly surprising, then, that a person looking at the Earth from up above for the first time experiences emotions that are difficult to articulate: the planet’s beauty is quite literally unmatched, in that its appearance keeps changing with every second. With that in mind, perhaps the only way to capture this fleeting splendour is to photograph it. That is what makes each snapshot from the orbit truly unique.

The exhibition at Erarta Museum features over a hundred photographs from both the first and the second of Sergey Ryazanskiy’s spaceflights. Each shot tells its own story, but all of them convey a feeling of profound respect for the Earth and a never ceasing fascination with its beauty. Just look at the landforms reminiscent of frost flowers on a window pane, the serpentine mountain ridges and river beds, the patchworks of farms, the scattered jewels of cities, and try to imagine that you see them through an observation window from extremely high above, with the immense vastness of space just overboard. It might as well be that even those geographical features that you know relatively well will emerge in a new light, as if you really saw them for the first time.

‘Quite often, casting a glance at what surrounds us in space, we cosmonauts do not immediately realize what it is we are seeing,’ says the photographer. ‘First come the emotions: the thrill caused by this indescribable beauty, the admiration, and a million more things you feel all at once, and only then follows the realization, the recognition of a particular location or natural phenomenon. It is my wish that the viewers, too, could see it all the way it appears through the spacecraft window, and get as close as possible to feeling how I felt while taking these pictures for you.’ 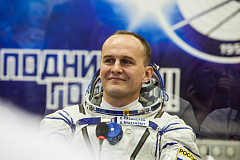 Sergey Ryazanskiy is a pilot cosmonaut, holder of the honorary title Hero of the Russian Federation, and space photographer. Sergey graduated from the School of Biology of the Lomonosov Moscow State University in 1996, later earning a PhD in Physiology and Aerospace Medical Science.

Joining the cosmonaut corps in 2003, he qualified for the ranks of research cosmonaut in 2005 and test cosmonaut in 2010. Sergey Ryazanskiy has completed two space missions spending a total of 306 days in space and became the world’s first professional scientist to command a spacecraft (Soyuz MS-05 in 2017).