exhibition
Aleksey Andreyev. The Worlds in Their Courses
all exhibitions
12+
Exhibitions Wing, floor 3

Erarta Museum presented an exhibition by the digital artist Aleksey Andreyev who places the past and the future, the earthly and the extraterrestrial in juxtaposition

The Worlds in Their Courses is Aleksey Andreyev’s second exhibition at Erarta. In stark contrast to the apocalyptic show of 2015 which was closely tied to the dark sci-fi subgenre, the new exhibition showcases colourful works featuring vibrant sky, one of the most easily recognizable elements of Andreyev’s universe.

His art stems from the applied field of design and illustration or, to put it more accurately, concept art. Easily labelled as the art of future, concept art models something that does not yet exist, like the visual environments of a sitcom or a computer game. Science fiction is where Andreyev feels most at home. By the early 2000s it was no longer considered a marginalised genre, firmly establishing itself within the cultural realm. Our contemporary society, too obsessed with all things cutting edge and trending, cannot allow itself the luxury of slowing down and coming to grips with what is actually happening: the future is arriving, if it hasn’t already. By giving the technology a human dimension, science fiction helps us catch up with the truly inhuman rate of the technical progress. Perhaps this is why Aleksey Andreyev’s art is so full of retro aesthetics and naturalism, evoking the humanity’s most cherished dream of flight. Interestingly enough, the air in his pictures is alive with some rusty and outlandish spacecrafts or even plain old vintage buses, just like in the best episodes of the Star Wars saga in which protagonists are seen piloting all sorts of quaint junk in the company of dusty robots.

The metaphor defining science fiction as the subconscious of culture perfectly sums up Andreyev’s slightly sentimental world. Anyone living in the modern technocratic reality is bound to find the artist’s landscapes endearingly welcoming: they help one recall the long-forgotten sensations, like riding on a non-aircon bus in the summer heat or diving off some rusty bar sticking from the water. Andreyev’s dynamic works throw together the past and the future, the earthly and the extraterrestrial: their collision drives the worlds in their courses that continue in the viewer’s head. Anything within the digital picture space that is close and personal for the artist, any colours and images, invoke a viewer’s deeply personal response. It is exactly for such encounters capable of propelling the worlds forward that exhibitions exist. 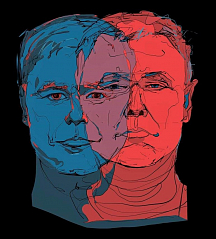 Aleksey Andreyev is a Russian digital painter working with VR and AR technologies.

The artist created numerous covers for books and magazines, including New Scientist and the complete works of Arkady and Boris Strugatsky, and designed an advertising image for Cirque du Soleil. As a concept artist, Aleksey was involved in the following projects: Ku! Kin-Dza-Dza animated feature film (directed by Georgy Danelia), Zona and The Roadside Picnic TV series (based on Roadside Picnic novel by the Strugatsky brothers), and Twisted Dagger TV series (based on the works of H. P. Lovecraft). The artist established his own digital painting academy. His artworks are in the collections of the State Museum of Urban Sculpture (St. Petersburg) and UGallery (San Francisco, USA).