Genji Monogatari is the first St. Petersburg exhibition by Hiroaki Miyayama whose art blends modernity with the traditional culture of Japan. The show borrows its name from The Tale of Genji, one of the most outstanding works in the classical Japanese literature of the Heian period (794–1185). The book ascribed to Murasaki Shikibu, a lady-in-waiting to Empress Shōshi, tells of the gallant adventures of prince Genji, the emperor’s illegitimate son. Each of its 54 chapters recounts a separate episode in the life of the youth who steals women’s hearts with refined elegance and ingenuity. For a solid thousand years the book has been fuelling the artists’ imagination. In the Edo period, illustrated volumes of The Tale were an integral part of a bride’s dowry.

Revisiting the celebrated text in our times of Westernisation and globalisation, Hiroaki Miyayama spent a whole decade creating his 54 colour etchings. Rather than literally illustrating the story in the conventional European sense, these prints are artworks in their own right. Offering poetic allusions to the literary masterpiece, they evoke the atmosphere of classical Japanese refinement. The female characters, whose names in The Tale of Genji match those of the flowers, are portrayed by Miyayama as a cherry branch, an iris flower, or a tulip bud . . . The artist’s concise prints reflect his aesthetic motto: ‘Everything superfluous is ugly.’ The visual style of the traditional Japanese bird-and-flower paintings (kachō-e) is combined here with such attributes of contemporary Western art prints as abundance of empty space, fragmentary imagery, and understatement. Hiroaki Miyayama has perfectly mastered the colour etching technique which requires a great degree of concentration: every colour is printed from a separate copper plate. In certain cases, the artist prints from 5 to 7 plates, using gold or silver leaf to create backgrounds.

Hiroaki Miyayama’s artistic interpretation of The Tale of Genji immerses the viewer in the refined atmosphere of the traditional Japanese culture. In a time when globalisation is negating the national and regional diversity, this project is worth a special mention. The works of the artist whose prints are housed in multiple museum collections, including the Shanghai Museum, National Taiwan Museum of Fine Arts, National Museum in Warsaw, the Pushkin State Museum of Fine Arts, and the State Museum of Oriental Art in Moscow, have been admired by viewers in Japan, USA, China, Italy, Belgium, Czech Republic, and other countries. Now the guests of Erarta Museum are offered a chance to enter this exquisite world. 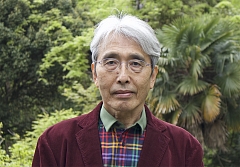 Hiroaki Miyayama was born in 1955 in Tokyo’s Asakusa district. His childhood passion for drawing led him to graduate from the Fine Arts School of the Tsukuba University in Tokyo in 1979, and later to complete postgraduate studies in printmaking and a one-year overseas study programme in the US and Europe.

The artist achieved recognition by the age of 30, with many of his etchings from that time receiving awards at international art fairs. As a founder of Printsaurus, a Japanese private art print association, he remained its long-time president. In addition to frequent solo shows in Tokyo, Hiroaki Miyayama’s artworks have been exhibited globally from NYC to Moscow; his Genji series travelled from Japan to Italy, Belgium, Czech Republic, and other countries.