Erarta Museum presented an exhibition of sculptures by the modern-day classic whose masterpieces grace the Tretyakov Gallery, the Pushkin State Museum of Fine Arts, the Russian Museum, and the streets of many cities

Numerous monumental compositions sculpted by Georgy Frangulyan include the Peter the Great sculpture in Antwerp, Alexander Pushkin monument in Brussels, allegorical figures crowning the Russian Academy of Sciences building, monuments to Bulat Okudzhava, Joseph Brodsky, Dmitry Shostakovich and Anatoly Tarasov in Moscow, Empress Elizabeth of Russia in Baltiysk, Isaac Babel in Odessa, and Albert Einstein in Israel. The unique sculptural composition The Barque of Dante showing Dante and Virgil on their otherworldly journey was installed in Venice in 2007 directly on the surface of the lagoon between Fondamenta Nuove and San Michele island. Frangulyan’s monument to the victims of political persecution, Wall of Grief, was the first national memorial to those killed during the Stalinist repressions. The expressive power and depth of the monument put it on a par with the world’s most celebrated memorials.

Georgy Frangulyan creates indoor and monumental sculptures using a wide range of materials including bronze, marble, wood, ceramics and glass, as well as drawings and paintings. A distinctive feature of Frangulyan’s creative method is his constant search for new figurative solutions reflecting and organizing the surrounding space. At the same time, the sculptor subscribes to the opinion that the monumental nature of artworks lies not in their physical dimensions, but in the spatial idea that underpins them. If architecture and sense of scale are present, the artwork itself can be of any size.

The Solid Line exhibition at Erarta Museum will showcase Georgy Frangulyan’s indoor sculptures featuring different styles and materials and united by a single idea: a sculpture can shape its environment first and foremost through the expressive nature of its form, and only secondarily through its subject matter. 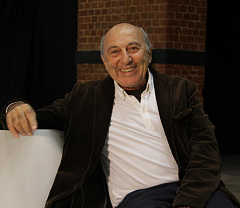 Born on 29 May 1945 in Tbilisi, Georgia. Moved to Moscow in 1956. In 1969 the artist graduated from the sculpture department of the Moscow Stroganov School of Design and Applied Arts.

In 1983 he established the first artist-operated foundry in the Soviet Union, using it to cast his own works ever since.

Georgy Frangulyan’s monumental sculptural compositions can be found in many towns and cities throughout Russia and the former USSR, as well as Belgium, Israel, Hungary, Bulgaria, Italy, and other countries. His artworks were acquired by the State Tretyakov Gallery and the Pushkin State Museum of Fine Arts in Moscow, the State Russian Museum in St. Petersburg, the Albertina in Vienna (Austria), Museo Dantesco in Ravenna (Italy), the Central Library of Colmar (France), the Bodleian Library in Oxford (UK), various museums in Sochi, Tambov, Berdyansk, Kaliningrad, Sofia, as well as by private collectors in Italy, Germany, USA, France, Sweden, Spain, Hungary, Czech Republic, and Bulgaria.