Erarta Museum presented an exhibition by Alexey Rouman, contemporary artist reflecting upon the future of the humanity, the clash of the Old and the New, and the emergence of a new Digital Code devoid of any emotions or instincts

Every piece by the Russian artist Alexey Rouman represents a concept in which form and substance are inseparable. However, unlike the proponents of conceptual art for whom changes of form do not affect the substance, translating into supremacy of the Idea over the Medium, Rouman in his artistic endeavours seems to have struck a balance between the two, letting them coexist as equals and complement one another to reveal a new meaning.

Rouman’s artworks are distinguished by impeccably concise means of creative expression verging on minimalism. His clear and precise imagery evokes notions which are often socially charged. The juxtaposition of simple visual images unveils the metaphorical meaning meticulously encrypted by the artist. Using stereotypes, common associations and cultural connotations, he foreshows the viewers’ reactions and follows their reasoning. The final destination on this sometimes winding path is the artist’s original concept encapsulating the true meaning of the artwork.

The title of the exhibition, Leave the Body as a Keepsake, alludes to Alexey Rouman’s belief that human consciousness will take a quantum leap in the future and our biological bodies will be discarded as atavisms in favour of digital forms. However, according to the artist, this future era of the Digital Code will arrive only if the society is ready for the new reality — one that cannot even be imagined, let alone fathomed, by those locked within the obsolete paradigm of the contemporary experience, largely defined by the cultural traditions of the past and the needs of the body existing in the present. 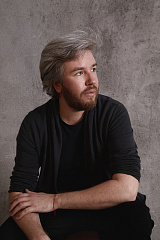 Alexey Rouman was born on 19 October 1980 and spent his early childhood in a multinational military town of the former USSR, later moving to Tatarstan with his family. From early on, the future artist showed interest in drawing, graduating from a secondary art school and later earning a degree in design from the Naberezhnye Chelny Art College.

In the mid-1990s Alexey Rouman was featured in a documentary from the Right to Left series dedicated to indigo children. In 1999, he took part in the First Russian Delphic Games.

In 2013, Alexey Rouman decided to focus all his efforts on creating art. Today his artworks can be found in numerous private collections in Russia and Europe. In 2016, Alexey collaborated with Sergey Shnurov, frontman of Leningrad band, on the latter’s exhibition Brandrealism: A Retrospective.