Dmitry Gutov has been one of the central figures of Russian contemporary art for more than twenty years. He is not only an artist but also a theorist, art critic, ideologist, editorial board member and a writer for “Art Life” magazine. In 1994 Gutov was one of the organizers of Mikhail Lifshitz Institute in Moscow, a funny regiment of Russian contemporary art, which combined features of art project, highbrow community, theorizing in the mode of old school  socialistic aesthetics, and performance. It interesting, that sometimes the reports in Livshitz Institute were required to be sung or intonated, but not read. So B. Groys ironically called Gutov “ideological Terminator”.

As an artist, Dmitry Gutov uses a wide variety of media, switching from one to another. It can be photography, painting, video, installation, or digital art. According to A. Ter-Oganyan, Gutov is one of the best artists of his generation. As a person with academic art history education, he never ignores the history of culture. Gutov refers to classical art, appropriates Rembrandt's etchings, Russian iconography, oriental calligraphy, and creates their new “versions’ in metal”. He artistically operates with any objects of culture, regardless of time and geography, by turning them into relevant phenomena of contemporary art. As per V. Miziano, Gutov’s works reveal his “aspiration to clarity of thoughts”.

The artist has been a member of the Venice, Istanbul, Shanghai, and Sydney Biennales; as well as Manifesta, Documenta and other exhibitions (in total more than 150 collective and 30 solo exhibitions). His works are presented in major Russian museums. 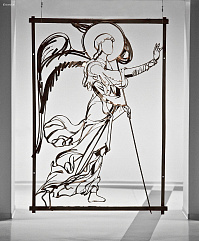