Rustam Ismagilov was born in 1977 in Perm. In 2000 he graduated from the Arts and Crafts department of the Ural branch of Russian Academy of Arts but he has been exhibiting since 1995. In 2002 he became a member of the Union of Artists of the Russian Federation.
In 2006 Ismagilov received public recognition for his contribution in progress and prosperity of arts and humanities in Perm. 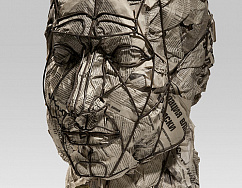