Dmitry Kawarga is a mysterious artist, who never appears neither in photos nor on video. He conceals his age and education, mentioning just that he has got a professional theater-artistic education. We know from reliable sources that he never graduated from the art college. So why does he hide himself? He says: "The artist’s personality is inseparable from his creative process". It means that that the viewer does not need to know the artist personally, it is enough to be familiar with his works, which are his best representations.

While hiding his private life, the artist nevertheless is a permanent inhabitant of Internet, where he is widely published under the name of "biomorphic radical". This term he deciphers as follows: "I like to think of myself as of an experimental researcher, who exists inside his own experiments and is capable to materialize invisible psycho-physiological processes by bringing their tridimensional projections into reality".

The artist is engaged in such complex area of art as science art, or scientific art. Science art objects are usually a result of collaboration of artists and scientists. It is an installation and a scientific research at the same time, which often goals to popularize science. Among the pioneers of this art movement there is a sensational Australian artist Stelarc, who implanted a real ear under the skin of his hand. The ear is equipped with a microphone and a transmitter, so it is able to hear and to pass the signals to its owner. However, Dmitry Kawarga distances himself from the science art term, emphasizing that he creates his own original art.

Dmitry Kawarga began his artistic journey with traditional painting, which gradually became more prominent and finally turned into sculpture. The further experiments and researchs led him to interactive robotic sculptures. The artist creates his biomorphic sculptures from polymers, which can be formed into any shape. In his installations, he seems to be recreating the models of consciousness. Complex designs of his installations resemble enlarged neural networks of human brain. The beauty and complexity of the structures visualize the processes occurring in the brain cells. According to the artist, in his work he tries to materialize the processes of thinking, consciousness and subconsciousness.

The artist began to exhibit his works in 1988 at Malaya Gruzinskaya Gallery, which then exhibited Moscow Nonconformists, the most famous representatives of Russian art today. In 2001, he made a science-art project together with the Honored Inventor of Russia Vladimir Beshekov. Over the time, the artist’s installations became more complicated, knowledge-based and spatial. In 2012, Dmitry together with the specialists from the laboratory of robotics of The Polytechnic Museum created two “unidentified living objects”, which were unpredictably moving while being programmed on random numbers, and even went out of the creators’ control.

Despite the scientific academese of his art, Dmitry Kawarga doesn’t resemble a science-obsessed “mad professor”, rather the contrary. The artist lives in the suburbs of Moscow, calls his house "Kawarga Hall" and has lots of pets, mostly dogs that live in his yard surrounded by multiple outdoor sculptures. 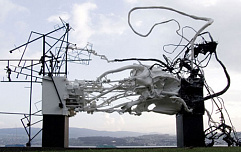 Born in Moscow. Has a professional art education. Since 1988 has been participating in national and international exhibitions. Lives and works in Moscow.

The works are presented in the following collections: