Konstantin Novikov is a talented young sculptor and his art has already gained deserved recognition. Apart from his active participation in exhibitions, Konstantin Novikov is a proud author of a cup for a World Chess Championship 2012. After studying in two respectable St Petersburg colleges - Roerich Art School and Saint Petersburg State Art and Industry Academy, — Novikov was living with his college mates in the art studio "Nepokorennye". Exhibitions that featured this group can be definitely named one of the most interesting events in St Petersburg artistic live of 2000s.

Konstantin Novikov has always been working with simple images that are capacious in their meaning, connected with memories from childhood but still quite fresh. One of his popular works is made from oiled wooden boxes from Soviet bakery house. On the top of these boxes are two naturalistic "bricks" of brown bread made from rusty iron. For the New Year exhibition Novikov made a scary installation with Soviet enameled pots with surrealistic print "pooping hedgehog" that were installed around slowly rolling Christmas tree made from barbwire. Toys on that tree were made from bread-crumb.

One of the most remarkable works by Konstantin Novikov is a caoutchouc bell. The idea was to create an interactive object based on a perceptive illusion. Pulling the bell tongue, a viewer almost physically felt vibration of bell's elastic walls coming through him instead of hearing a sound. In process of exhibiting the project, author's strategy wasn't accepted by a viewer. In the context of modern Russian realities the work gained new meanings, echoing with vibration on political situation, media condition and whole atmosphere of silent stressful waiting. Absurdist artifact from zeros epoch — a soundless tocsin — was shown at first at the large educational and patriotic forum for young talents in Seliger in 2009. Following innovative and interactive principles of contemporary art, Russian president Dmitry Medvedev, smiling and squinting in front of the sun, rang the bell. As expected, there was no sound. 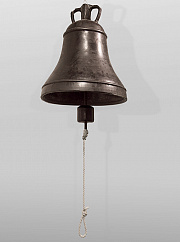 Konstantin Alexandrovich Novikov was born on the 11th of January, 1981, in Leningrad.

Member of Union of Russian Artists.