Oleg Rostkov was born in 1987 in Leningrad. While studying at the department of metal art at Stieglitz St. Petersburg State Academy of Art and Industry, he tried himself as a goldsmith, a painter and a sculptor. As befits a young man of the twenty-first century, Oleg takes a lively interest in the world of digital technologies, which have already inspired him to create a jewelry series and several art objects. Rostkov reveals the world of complex computer technologies, or the “gear” as per the expert jargon, using the real gear and iron parts, which he forms in different shapes upon the dogma of minimalism "less is better than more". 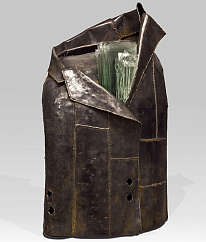 In 2010 graduated from the department of metal art at the Stieglitz St. Petersburg State Academy of Art and Industry.