Ivan Sakhnenko was born in 1955 in Tula. He began to paint very early, but entered the art college only after several years of working as a theater prop maker. Studying at the department of sculpture at the Penza Art College helped Sakhnenko to develop his drawing and portraying skills, which, in combination with the artist's expression, brought to a special and recognizable brushwork. Unfortunately, Sakhnenko didn’t graduate from the Penza Art College since he was expelled in 1979. Probably, somebody denounced of the artist to the authorities, as even at that time Sakhnenko was not afraid of saying his opinion loud. So the artist was invited to the teachers council and given only one reason: “The KGB is concerned about you”. At that time Sakhnenko already worked independently, but he didn’t want to leave his studies, so he tried to enter the Minsk Art College which he managed at the second attempt. But very soon he realized that the classes are less useful for him than his individual work. He could make a drawing in half an hour, while it took the other students more than a day. At this point Sakhnenko decided to return to Tula. The most of the works created over the years of studies he burnt.

Tula is a small town, and even though Moscow is increasing and each year is getting closer to its borders, the town is still very provincial. However, this situation is rather favourable for inner workings – Sakhnenko reads lot, plays chess and leaves his house only for a walk or to make sketches en plein air. The same need pushes him to travel around the world: Germany, France, Italy, exotic Ethiopia, Turkey, Tunisia and Montenegro.

Sakhnenko travels with a sketchbook, so he always brings a lot of drawings and canvases from his journeys. In addition to landscapes and still lives, he works on such complex topics as mythological, historical and biblical subjects. Erarta collection features such of his works as “Narcissus and Echo”, “Lao Zi and Confucius”, “Susanna and the Elders” — small and large, and “The Expulsion of the Moneylenders”. All his works vividly convey the mood of the depicted characters which are usually strong and healthy: even the biblical Susanna looks like a village woman. Christ in the “The Expulsion of the Moneylenders” and Ivan the Terrible in “Ivan the Terrible killing his son” are similar in their anger, their figures seem to be striving to break out of the narrow boundaries of the canvas, the heroes’ faces are covered with angry spots — on Christ’s forehead there are crimson wrinkles, and the son of Ivan the Terrible, on the contrary is very pale.

Very often artists’ brushworks are compared to their teachers, but Ivan Sakhnenko is hard to be paralleled with any, even though Penza art school has given him a lot. Ivan told a story about his dispute with a friend of his, Valery Krasilnikov, who died in 1995. Krasilnikov belonged to Belyutin’s school and considered tradition of apprenticeship an important and necessary institution. Sakhnenko in his turn is sure that time and trends are more powerful than individuals, but he personally tries to pull away from any kinds of trends, so it is very difficult to accuse him of borrowing or copying. 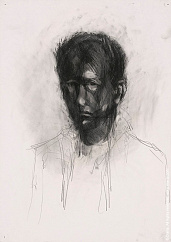