Petr Shvetsov was born in Leningrad in 1970. He graduated from the secondary art school in the Academy of Arts and went on to explore European art. In the early 1990s, Shvetsov had opportunities to work in England, Denmark, Finland and often visited the USA. Shvetsov’s international creative activity has clearly had a positive influence on his artistic talent. Today, Petr Shvetsov is one of the most well-known contemporary Petersburg artists by those outside of Russia.

He became famous for his shocking exhibition projects. Exhibitions such as Pandora’s Box with living flies in a cocoon and The Living and the Dead with a stuffed fox defiled by moths and poured over with silicone show his morbid content selections. He also has exhibitions featuring refined painting including the Marsh series and The Head of an Architect series, which were worked on over the period of thirteen years. With equal wit and expressiveness, Shvetsov establishes daring projects in the spirit of popular trends and returns to a traditional painting technique. He then works to hide his skills as an experienced graphic artist to shock the audience with grotesque characters of his pictures before getting back to artfully using pure lines in his following works again. An attentive viewer, however, is able to see the artist's unique style that he established through a long, creative search process. 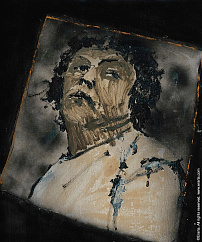