Alla Dzhigirey was born in Leningrad in 1964. Dzhigirey’s parents supported her early interest in art. Her father, a professional artist, took the role of being her first tutor. When the time came she easily earned a place in art school, and later was accepted to the Repin Institute of Painting, Sculpture and Architecture. Alla studied architecture and restoration and worked as a restoration architect for three years after graduating. The artist worked on a project to reproduce the interior of the room of Paul I in the Gatchina Palace. This experience allowed her to join the Union of Architects. At that time she developed an interest in lithography, which influenced her to decide to leave her initial profession after the end of the restoration project that she had worked on.

The artist made up her mind in favour of painting and graphics, as these were the visual arts which seemed closer to her. Since that time, Dzhigirey has illustrated about ten books and participated in more than 200 exhibitions, competitions and art festivals in Russia and abroad. In connection with Boris Zabirokhin, whose artwork is also presented in the collection, Alla Dzhigirey is also a founder of the Children of Arkhip Kuindzhi art group.

The artist has always been independent when choosing her priorities. The Russian school of painting in general, and in particular the works of Korin and Nesterov, towards whom her father leaned for inspiration, has not become an example for her to imitate. Alla’s art shows her preferences for the early Renaissance masters. Today one can easily spot the influence of Paolo Uccello and Fra Beato Angelico in the laconical, strict and ascetically decorative compositions by Dzhigirey. She says that her objective is to reach the purity of form, and to express emotions by means of colour. This is how the precepts of French impressionism, Italian Renaissance and ideas of the synthesis in the art of Malevich gave birth to Alla Dzhigirey’s unique style. 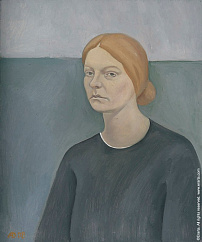