Denis Ichitovkin is one of the youngest artists featured in Erarta's collection. He was born in 1977 in Perm. After finishing at a local art school he went to Saint-Petersburg where he studied at the Repin Institute, at Andrey Mylnikov's workshop for monumental painting. A conservative academic education combined with individual artistic preferences formed Ichitovkin's painting manner which involves strict, almost photographic, realism, contemporary interpretation of the painting theme and principles of subject formation. The artist depicts interiors of typical city apartments with unremarkable scenes: people talking in the kitchen, someone sewing, someone dozing in a chair. The essential thing in Ichitovkin's works is not someone's presence, but rather their absence: this emptiness and understatement create a captivating effect in his paintings. Half-opened doors lead to rooms out of sight, unoccupied chairs: these details are reproduced in a documentary, passionless manner. These absences don't hint at something that has happened. They make the viewer into a participant of the action.

The atmosphere of Ichitovkin's paintings is close to the shimmering silence we can feel when looking at the paintings by Jan Vermeer. It is appropriate then that the young Petersburg artist has already participated in a few exhibitions of Russian art in the Netherlands, including one that took place in the native city of the great master. 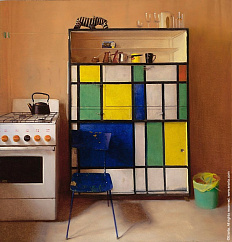