Dmitry Shorin's paintings are immediately recognizable – influenced by photography and referencing mass media images, he paints beautiful young girls almost exclusively. Frequently placing his fragile and ephemeral heroines in the heavens paired with airplanes, his paintings are uncanny. Matte and somewhat drained of colour, Shorin's images are rife with unease created by a repressed yet ever present psychological eroticism. The girls he paints are constantly observed, their images created for and consumed by consumer society, but Shorin's presentation of them is them is that of the voyeur, the unseen observer.

Dmitry Shorin was born in Novosibirsk in 1971. He studied in the Graphic Art Department at the M. Gorky Teaching Institute in Omsk and continued his studies at the Omsk Academy of Service specialising in costume design, graduating in 1990. That same year, he moved to St. Petersburg where he commenced special post-graduate studies. In 1993 he was admitted to the Association of Artists and in 1998 he joined the UNESCO International Federation of Artists. He continues to live and work in St. Petersburg. 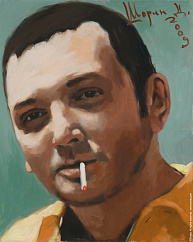 Dmitry Shorin was born in Novosibirsk in 1971. He lives and works in St. Petersburg.