Dmitry Plavinsky (1937–2012) is one of the key representatives of the Moscow Nonconformist Art of the second half of XX century, he created his own symbolic philosophy and deep analysis system. Dmitry Plavinskiy was gifted with a powerful energy and at the same time he tended to profound analysis in his work. The art of this artist is now being recognized all over the world.

Each work of Plavinsky is a multilayer artistic structure. Any texture or shape, whether of a manmade artifact or of an organic element, is interpreted by him as a part of multi-faceted symbol, essential for deep understanding of the universe. The author perceives the universe as Mono-Time, which is a closed-circuit system, a solid multi-texture layering of the memory of the past, dynamic of the present and knowledge of the future.

The image morphology in Plavinsky's works is fickle and a subject of metamorphosis. There is always an invisible presence of non-being, when the image itself doesn't exist yet but the foresight of its final destruction and dissolution hangs thick in the air.

Cathedral ruins in flames, an abandoned church devoured by sprawling trees, a shabby boat buried in snow, are not the visions of the ends of civilizations, but the artifacts reminiscent of the eternal journey, where the final always coincides with the starting point.

For Plavinsky an image is equivalent to a sound. The artist is able to capture and reflect the tone of any object. The sound here is primarily the biblical prehistoric Logos, conformal to the first naming of the object, and inaugurating the moment of image nativity from nothingness.
The artist's works can't be perceived with a unified interpretation of a visible object. A simple tree cross-section looks like a map of the Universe, and a silhouette of an old Scarecrow reminds a prophet's figure. A Viking ship resembles a zoomorphic creature of unhuman power or a pagan demon. A decayed leaf is allegorized as a part of the cosmic matter, and the surface of the leaf turns into space width and length.

Plavinsky's art works are always dynamic and change in the process of perception. His multilayered paintings, collages and etchings seem to be made out of complex textures that can be eternally looked at. There is no fixed composition; the space is fractionized into multiple details. And it's not a coincidence that many works have panoramic composition which indicates that we manifested image is only a fragment of a bigger immaterial substance. 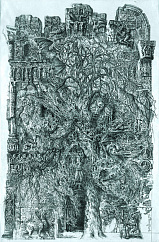 From 1951 to 1956 studied at the Theater Design Department of the 1905 Institute of Art, class of A. Shestakov, a former chief artist of the Vsevolod Meyerhold's Theater.

In 1957 worked at the international artists' studio at Gorky Park and participated in the exhibition of the VI International Festival of Youth and Students in Moscow.

From 1958 to 1965 travelled around the country: visited Central Asia and northern Russian towns (Pskov, Kostroma, Ferapontovo).
Starting from 1960 participated in numerous international exhibitions of nonconformists in the U.S., England, Italy, Germany, France, Switzerland, Denmark, and Japan.

From 1975 a member and a regular participant of exhibitions of the Moscow Joint Committee of Graphic Artists on Malaya Gruzinskaya Street.

In 1975 participated in the exhibition at Beekeeping Pavilion on VDNKh (Moscow).

From 1978 a member of the Soviet Union of Artists.

In 2004 the State Tretyakov Gallery presented his personal retrospective exhibition.

In 2009 MMOMA presented author's exhibition "Alone in the Search for the Meaning of Life". Curator Igor Metelitsyn.

In 2009 Open gallery held a joint exhibition by Dmitry Plavinsky and Maria Plavinskaya "Music of Spheres".

Lived and worked in New York and Moscow.