about the artist
Vladimir Dukhovlinov was born in the Dugavpils, the capital modern day Latvia, which is a Baltic region in Northern Europe. As a child, Dukhovlinov was surrounded by a particularly volatile political and social situation, as 1949 saw the period of USSR dominance. The country itself only managed to gain independence in 1991, when Russia recognized the separation of its multiple states. The historical governmental authority upon Latvia by the USSR motivated Duhovlinov to move to the old Russian capital of Leningrad in 1967.
Alongside his completion of secondary school of linguistics, Dukhovlinov pursued his passion for art and artistic pursuits, through personal membership at numerous artistic societies, which focused on design and architecture. His talent for figurative painting, as well as his exceptionally skilled drawings spurred Dukhovlinov to apply to the coveted Serov Art School. There, due to his complete fixation on relics and antiquities, Dukhovlinov chose to study at the faculty of restoration. Here, he had access to renewing and remodeling old icons, church frescos and religious art works. This access was greatly limited to only those who were enrolled at the restoration faculty, as the state of USSR was proclaimed to be secular, due to the contradictory social stance of religion and socialism. This admission into an artistic world, which was only available to him has had an impact on Dukhovlinov’s artistic direction.
Upon completing his studies at the Servo Art School, Dukhovlinov went on to continue his artistic academia at the Muhina Art school, in the faculty of design. Here, strong tendency of focus upon figurative line drawing as well as the favoritism placed upon German expressivism as study, meant that Dukhovlinov was very aware of the artistic trends throughout Europe at the time. Dukhovlinov graduated from the Muhina Art School in 1976, immediately becoming a member of the Artist’s Guild of Russia.
From 1982 onwards, Dukhovlinov’s artistic production has been more than adept, which is exemplified by his taking part in more than 300 exhibitions, and more than 20 solo exhibitions globally.
show 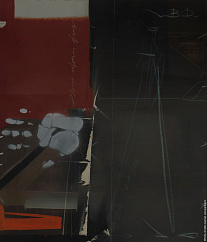 biography
Vladimir Dukhovlinov was born in the Dugavpils, the capital modern day Latvia, which is a Baltic region in Northern Europe. Dukhovlinov is still currently living in St. Petersburg, where he continues to produce works.

His works can be found in the following selected collections