Vladimir Ovchinnikov’s fame precedes the need for an introduction, which is shown though his record with Sotheby’s, which was one of the most impressive among contemporary art sales. Internationally acknowledged as one of the leading artists in contemporary Russian art, it is simply a privilege to be able to include his works within our exhibition. His masterpieces stand out radically from all other included artists due to his consistent individualistic approach when it comes to exploring his own artistic talent.

The most evident nature of his works is his persistent use of gold, which is highly unusual for a contemporary Russian artist. This inclusion of gold echoes traditional iconography, which serves to represent the Russian Orthodox Church; consequently ensuring that the mind of the viewer wonders to the hidden message within.

In relation to the subject of contemplation of the unknown, Ovchinnikov also frequently turns to ancient myths and scriptural topics, provoking viewers to interpret his works as mythological messages. Simultaneously, he substitutes the characters of the chosen parable with his own personages – excessively carnival and narcissist in character. The personage does not correspond to any kind of advisability – neither mythological, nor realistic. The subject personage remains alien and destructive, disregarding the context in which the artist places him. His paintings give us a fine example of the artistic interpretation of absurdity.

In terms of personal biography, Ovchinikov was born in 1941 in the Perm region, where his family was evacuated during the World War II. From 1945 onwards he lived and worked in Leningrad/St.Petersburg. Although Ovchinikov has not received any classical education from state art schools and colleges this has not prevented the artist from achieving national as well as international fame. At present, he is a member and deputy chairman of the St.Petersburg Department of the International Federation of Artists. 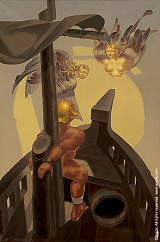