Although she was born “Maya”, the artist prefers to be known as Masha. Masha Tregubenko was born in the spring of 1962 in Leningrad. She spent her childhood in a small military town. Her paintings often express the memories of sadness and loneliness experienced in this small town. It was here where she studied at an art school, and she later went on to Leningrad to study graphics at Herzen University. Tregubenko had her graduation exam in the history of arts department and initially planned to be an art critic. However, she changed her decision after meeting the famous members of the Mitki (Mit’ki) art group, Vladimir Shinkarev and Vladimir Yashke. Their joint visits to exhibitions and conversations held about art strengthened her wish to become an artist. Tregubenko says that both of these artist friends significantly influenced her painting.

Tregubenko creates paintings in absolute silence and often works at night. She labours at every project for many hours, and paints it anew over and over again until she achieves a height which is known only to her.

The artist lives in the heart of Petersburg on Teatralnaya Ploshad’ (Theatre Square, on which stands the world-famous Mariinsky Theatre). Tregubenko says that she is inspired by simple things like brief impressions of the city, people’s conversations in the street, a house’s colour in the neighbourhood or washing the dishes.

Tregubenko confesses that the profession of an artist is not romantic at all. Frequently she has to work when she has no inspiration. She says that she doesn’t want to be an artist at times and wishes she could live like ordinary people do. Tregubenko hasn’t succeeded in that, at least for now. 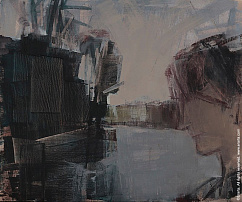