Felix Volosenkov was born in Krasnoarmeisk in the Donetsk Region of Ukraine in 1944. As a boy, he dreamed of becoming a monumentalist. After graduating from the Baku Art School, Volosenkov feared restrictions and decided not to enter the Mukhina Art School or the Academy of Arts. Instead, Volosenkov decided to become a stage artist and went to the Leningrad State Institute of Music, Theatre and Cinematography. Later, this time spent at the Institute would have a great impact on his art: he has arranged his artistic career as a play in the theatre, with its own characters and intrigue. Since 1977 Volosenkov has been working in the theatre where he has designed about 50 projects, while at the same time teaching drawing at the art studio.

Since 1984 Volosenkov has been exhibiting with Valery Lukka and Vyacheslav Mikhailov. This group of artists has begun to ‘overthrow the canons of painting’. The Petersburg circum-artistic publicity found the artwork of Volosenkov and Lukka to be scandalous and branded their manner as extremely radical. This friendship of Volosenkov, Lukka and Mikhailov anticipated the establishment of the Contemporary Art Academy of the Immortal in Saint-Petersburg by its leader Felix Volosenkov. The group was formed in 1994 with the aim of supporting and developing new styles in contemporary art.

Paintings by Volosenkov have complex textures: he uses cloth, foam-rubber, levkas and acrylic. In order to intensify the effect produced by his pictures, the author uses his talent as a stage artist to make the space of canvas into a theatre performance. Irony and the grotesque, unrestrained energy and a touching nature are characteristics of Volosenkov’s artwork that seems to be created in one breath and never leaves you short of thoughts and opinions. 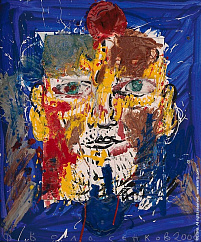