Andrey Gorbunov's monumental paintings combine the familiar imagery of art history with the equally familiar images of technology. Fragmenting both, he strives to create a more realistic visual language. Aggressively obsessive about his image making, Gorbunov collages pages from anatomy textbooks with finely drawn tattoos, fragments of skeletons, QR codes, German Renaissance Madonnas, and 3D landscape graphics with painstaking meticulousness. Fragmented and separated from their habitual contexts, the bodies in his paintings become inanimate objects of desire, and, as fetishized objects, heighten the disparity between physiology and spirituality. Questioning the eternal problem of being, Gorbunov's paintings seem to suggest that truth exists only in the body, and he presents us with the carcass of an image.

Born in Dzerzhinsk in 1979, Andrey Gorbunov studied at the Nizhniy Novgorod Art School and St. Petersburg's Mukhina Academy, where he is now a professor in the monumental department. His works can be found in private collection in Russia, Europe and North America. 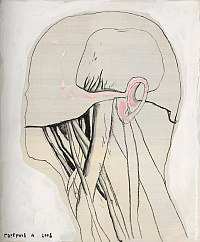 Andrey Gorbunov was born in 1979 in the town of Dzerzhinsk. He is a graduate of the Nizhniy Novgorod art school and the St. Petersburg, Russia; Art and Industry Academy named after Muhina. Since 2006 the artist has been teaching at the department of monumental and decorative painting of the Academy.

The artist's priority is contemporary art. He works in different techniques. Since 1997 he has been engaged in active exhibition activity.
Andrey Gorbunov is the participant of many group and personal exhibitions. His works can be found in private and museum collections in Russia, England and the USA. The artist currently lives and works in St. Petersburg, Russia.