about the artist
Vyacheslav Mikhailov was born in the remote village of Arzgir, located in the Stavropol region. After serving in the army, Mikhailov attended the Repin Institute of Painting, Sculpture and Architecture in Leningrad where he studied under the renowned art professor Yevsey Moisejenko.
After completing his post-graduate studies in 1979, Mikhailov, along with Valery Lukka (also an Academy of Arts graduate) and Felix Volosenkov, founded an art group, later named by art critics The Three Bogatyrs, devoted to searching for new ways of expression. In order to create their desired painterly effect they used layers of levkas (a traditional material used in icon painting) and paint to create relief, and thus moved away from the established painting tradition, seeking to make their works more organic and visceral. Though their work contained literary references and links to mythology, their focus was the physicality of texture.
Now one of the foremost painters in St. Petersburg, Mikhailov has developed a painterly language that is founded in form and semantics. His paintings fascinate with their intricate surfaces and saturated colours. Working in large series and developing a group of work over an extended period of time, Mikhailov cherishes the notion of memory in his work, and is himself committed to both the present and the past in his painting practice.
In the early 1980’s Mikhailov began participating in various exhibitions, both in Russia and abroad in Europe, China and America. He had a solo exhibition at the Russian State Museum in 1995 and contributed to a group exhibition at the Hermitage Museum in 2004. He is a member of the Russian Association of Artists and a member of the State Artists Association of Italy, "ITALART". He was also awarded the title of `Honoured Artist of Russia'.
show 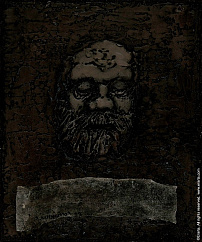 Private collectors of his work include Vladimir Putin (Prime Minister of Russia) and many other prominent collectors in Russia, and across Europe including Belgium, UK, Germany, Italy, Netherlands, USA, France, and Finland.
artworks by this artist