Yury Chestnikov was born in the spring of 1961 in Rostov-on-Don to a military family. When his father, an officer, transferred to Tula his family moved with him. In Tula, Chestnikov attended an art school. Later, in 1977, the artist went to the Grekov Art School in Rostov where he studied painting and was taught by Timofey Teryaev.

At present, Chestnikov lives and works in Tula.

Yuru Chestnikov is distinguished by his unusual artistic orientation. He has no specific established style. According to the artist, all of his works are separated from one another ‘by abysses’. This means that his painting style starts and finishes uniquely in every new painting.

The artist makes no secret that his artwork is inspired by the masters of modernism; one can easily notice the influence of the twentieth century’s masters in every each work. Such an approach is not surprising. ‘Quotationism’, or the practice of referencing various phenomena in the history of arts, is an attribute of postmodernism.

The first passions of the artist were the works of Larionov and Goncharova, followed by the impressionists and Cezanne, Matisse and Picasso thereafter. Many of his landscapes painted from nature remind the viewer of Cezanne in their colour and structure, while the interiors he painted in his workshop are closer to the works of Matisse.

Chestnikov works ‘from impression’. Even his portraits are painted from memory, he sketches only the necessary details from life. He depicts many female images and they all somehow resemble his wife. The image of the woman varies from picture to picture depending on the artist’s state of mind.

Chestnikov’s bright and expressive modernist art has features of the Russian melancholic nature, as well as the peace and tranquility peculiar to people from northern lands. 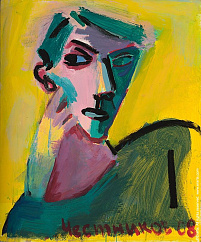