Alexander Rumyantsev was born in Leningrad in 1951. By the age of 24 the young artist already had a diploma in easel and monumental painting from the Academy of Arts, where he obtained a classic artistic education, and was practicing in the workshop of Andrey Mylnikov. After graduating in 1976, Rumyantsev started to teach at the Academy. Although he was quite fond of his work, it became harder and harder for him to combine teaching, painting and attending regular exhibitions in Russia and abroad. For that reason Rumyantsev left the Academy in 1984.

It would seem easy to imagine the artwork of a person with such a classical artistic background, although in case of Rumyantsev such assumptions are likely to be wrong. Rumyantsev has a free style: ordinary land- and cityscapes gain spontaneity. Their curved, unexpected lines follow the brush and it is as though it is not the landscape directing the artist’s hand, but rather the artist’s hand controlling the landscape. Rumyantsev’s style is a lyrical sort of expressionism, a style that exists in isolation from classical German or American expressionism. This is a kind of expressionism that not characterised by strain, pain or the bursting of emotions.

Rumyantsev’s artwork that is featured in the Erarta Collection is mostly from the rural series. Part of the collection was painted before 2000, at which time Rumyantsev moved to Germany. In spite of the fact that the artist lives in Germany at the moment, he visits Saint-Petersburg quite often to take part in big city exhibitions and small art events organised by friends. 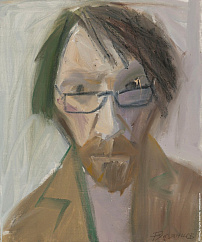