Alexander Volkov was born in Tashkent in 1964. Later the family moved to Leningrad.

Alexander tries to pass the entrance exams to Serov art college, but fails, and that's when his art education stops. He graduates from the College of marine instrument , followed by the army and the work that quickly bores him .

And he begins to paint, sell them on the Nevsky Prospekt in Ekaterinenskiy garden. Then Volkov enters the "Association of Free Artists", which arises at the library named after Alexander Blok on Nevsky Prospect, 20 . This moment of the artist's social status' acquisition is considered by Volkov as a very important one in his creative biography .

Volkov says that Matisse and Van Gogh, as well as Chinese painting and Japanese woodblock prints "Ukiyo-e", influenced the formation of his manner of painting. Masters of modernism taught him the generalization of form and spontaneity in an appeal to modern life.

Volkov's semi-abstract painting is built on contrasts of bright saturated spots and gray or green background. The artist likes to portray the city, its everyday life, cars and residents. He has a special vision of the city: the austere beauty of the architecture of the central part of Saint-Petersburg is balanced in his work with the bustle of traffic, with a network of wires in the narrow lumen of the city sky and bright splashes of traffic lights and signs.

According to the artist, there should be nothing unnecessary and nothing of minor importance in the art-works, and each piece of canvas should be run as a standalone picture. 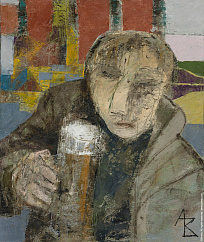