about the artist
Tatianin was born 1963 in Lipetsk, Russia where he continues to live and work. As expected, due the lack of financial support for artists during his youth, and despite his passion towards the arts, Tatianin went on to initially pursue a more economically viable path. Hence, Tatianin went on enroll and graduate from the Lipetsk Mechanical Engineering Technical School in 1982. Consequently, Tatianin was also to develop his interest and passion for art whilst in the knowledge that he would be able to physically support himself and his family later on, if need be. So, between 1982-1989 Tatianin worked at the Lipetsk State Academic Drama Theatre named after Leo Tolstoy. This period say Tatianin become more comfortable in working with oil and the production of art works in general. Furthermore, this is also when the artist began to sign his canvases, where he shortened his full name to an abbreviation, to which he modestly added, “Genius of the Lipetskian Earth, Artist and Bookseller”.

As an artist, Tatianin initially focused upon traditional naïve characters, such as stray animals, whilst also exploring mythological characters such as mermaids. These enticing characters were eventually replaced by well known European artists and today's annoyingly popular anti-heroes, whom the artist calls “vampires”. These are such artists as Joseph Beuys, who founded the concept of gesamtjunstwerk or social sculpture.

Due to his increased admiration and appreciation of late 20th century artistic movements, Tatianin went on to found the Lipetsk Centre of Contemporary Art with art collectors Aleksandr Nazarov and Yury Sodorov. This still remains one of the only independent contemporary art centers in Russia.

Tatianin straightforwardly brings artist and citizen together in the heavy black irony of the world around them. It is therefore difficult to evaluate Tatianin's works through the usual analytic prism of composition and color, in as much as his ideas and unique philosophy are always the dominant elements in them. The artist himself recognizes this difficulty, labeling his style “intuitive neo-primitivism”, even though it is doubtful whether the mutable prefix can justly be appended to the immutable idea of the naïve. If you wished to cast Tatianin in a particular mold, then one might quickly call it naïve conceptualism. The artist, unique among all others, is both philosopher and man of words who can describe his finished works telepathically, irrespective of their painterly qualities.

Tatianin should be considered as one of the most relevant artist on the Russian scene today, often appearing on the evening news, while mornings are given over to his canvases. The artist calls the latter “Urgent Painting”. 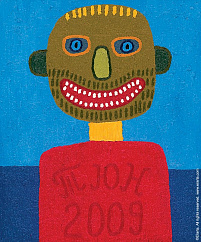