Leonid Kolibaba was born in Rovno, Ukraine in 1946. According to Kolibaba, he considered himself to be an artist already when he was in eighth grade. One day, the school principal came to Kolibaba’s class and announced that his class would meet with the sculptor Boris Rychkov. Having looked through the children’s drawings, Rychkov stopped at Kolibaba’s and recognized the talents of a sculptor. Kolibaba believed in those words and since that time took on modeling.

The artists Boris Rychkov and Aleksandr Pirozhenko were Kolibaba’s first teachers. Their training helped him to enroll in a school for decorative and applied art in Kosovo, a Ukrainian town. In the third year of studies, Kolibaba was conscripted into the army, after which he continued his education in the Serov Art School in Leningrad. He later attended the Mukhina School to study architectural and decorative plastics.

After graduating, the artist took on the large task of making relief works at the Sayano-Shushenskaya hydroelectric power station in Krasnoyarsk and Bratsk.

Kolibaba went to Denmark in 1991, where he created reliefs with the portraits of Danish Kings. Then he taught in a college in Great Britain before working in Austria and Germany. Don Quixote, a sculpture by Kolibaba, was set in Belize.

Kolibaba has taught sculpture in the Stieglitz Academy since 2005. Every summer he takes his students to Yuryev-Polsky to study the reliefs in the Georgiyevsky Cathedral.

Kolibaba treats monumental sculpture as his main occupation. He uses various media for his sculptures such as stone, metal and his favourite material, wood. According to Kolibaba, the biggest concern of a sculpture is how it interacts with space. Kolibaba’s ‘golden rule’ for sculptures is finding ‘the unity between natural backgrounds and manmade objects’. 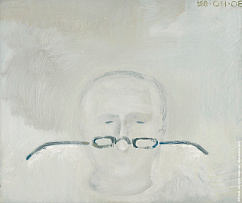