Nikolay Rybakov is a famous Siberian artist — a painter and a graphic. In 1980s, looking for Siberian artistic identity, he turned to archeological and ethnographic material, traveled a lot around Siberia, from Taymyr to Tuva, took part in expeditions. Later he bought a house-workshop in Khakassia where he spent a lot of time in contemplative silence, rarely coming to Krasnoyarsk. Rybakov feels himself not only as an heir of Russian old-believers, but as an heir of Scythians, Kyrgyz, Old Turkic peoples, Paleoasians.

Working in trans-vanguard, balancing on the edges of figurative and abstract art, he develops his own Siberian style, not quoting already prepared archaic images but finding his own plastic decisions. His artistic search is charged by inspiration taken from Neolithic art of Minusinsk Hollow to traces of Khakassia’s Manicheans of the early Middle Ages. Rybakov’s art is an attempt to feel and depict the depth of time and genius loci. This history-inspired artist never forgets about material’s formal expression. His work is also characterized by complex textural organization of the surface, dashing paint-and-varnish mixtures and attraction to painterly mastery.

Rybakov is a laureate of All-Union competition “Golden brush” (Moscow, 1991), Baltic biennale of graphics (1995), French National Society of Fine Art (Louvre, 2012), and participant of numerous Russian and international exhibitions from Australia to Paris. His works are exhibited in many museums, including Tretyakov gallery, Centre of Contemporary Art M’ars, Erarta Museum of Contemporary Art. 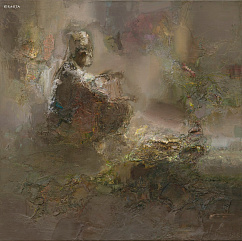 Born in 1947 in Trans-Baikal region. Lives and works in Krasnoyarsk.