Inna Sklyarevskaya was born in Leningrad in 1962. She began drawing when she was a child and went to secondary art school at the Repin Institute. After completing school, Inna graduated from the department of drama studies in the Academy of Dramatic Art. She worked as a drama critic and wrote articles on ballet for a few years.

Sklyarevskaya returned to painting in the early nineties. Landscape became her favourite genre, and this is especially true of marine landscapes. The artist likes to place figures of people in her landscapes and, of course, she loves her dear home city of Saint-Petersburg.

Sklyarevskaya’s painting is masterfully light. She uses a manner which might seem to be sketchy and unfinished. Nevertheless, her generalized compositions reveal the true profoundness of experience and a precise rendering of a state. She confesses that she often paints intuitively and tries to complete her work quickly, in bursts of activity.

In the year 2000, five artists, whom included Sklyarevskaya, formed an art group called The Children of Arkhip Kuindzhi. The group members share a devotion to painting based on their passing ‘impressions of nature’. They add a rich, viscous colour to the sketch-like pictures. The artists like to depict Petersburg’s red-brick industrial constructions, grey desolated villages, and blue marine expanses. Apart from Inna Sklyarevskaya, other members of the art group have artwork that is featured in our collection, Boris Zabirokhin and Alla Dzhigirey. Despite their shared guidelines, each artist’s style is unique and recognizable. Sklyarevskaya’s artwork is distinct by its depictions of human figures dissolving into landscapes and the warm feeling of unity between man and nature that they produce. 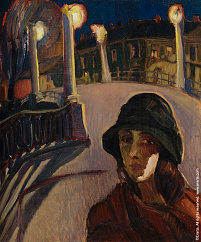