Nikolai was born on 5 March, 1985, in Yugorsk, Siberia. He graduated from the Yugorsk Institute of Fine Arts in 2005 and from 2005 to 2011 he attended the graphic faculty of the Ilya Repin St. Petersburg State Academy of Painting, Sculpture and Architecture.

During his study and after graduation he actively participated in various competitions and contests, as well as in group and solo exhibitions in Russia and abroad. 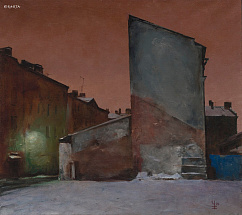