Born in Leningrad in 1951, Alexander Petrov was a son of the well-known graphic artists, the Petrovs. As a child he was surrounded by art albums, artwork of his parents and their friends. It is no wonder then, that Alexander went to the Art School at the Academy of Arts and later entered the Academy itself where he studied at the workshop of Andrey Mylnikov. In 1975 the artist graduated from the Academy and became a member of the Union of Artists. After graduation he then started to work on orders offered by the collective artistic organization, but the Soviet commission on art exhibitions rejected his works very often. From the mid-seventies, Petrov worked often on his own artistic language and, according to his own words, it took him fifteen years to forget and discard the manner of painting cultivated in him by the Academy. During that period Petrov neither exhibited his artwork officially, nor participated in exhibitions of Leningrad’s underground artists. In the first part of the 1980’s, Petrov finally achieved what he was striving for — he developed a vivid and recognizable style. Paintings by Petrov are full of fantasy but also occasionally contain aggressive characters. These are strange subjects painted in a pastose manner with rich bright colours that strike your eye.

Alexander Petrov became famous at the beginning of the perestroika period: he exhibited both in Russia and abroad and his works were bought for museums and private collections. The period of Petrov’s most active artistic work was the time between the mid-eighties and the beginning of the 2000’s. After the year 2000, Petrov lived in his workshop in the House of Artists at Pesochnaya Embankment and was ill for quite a long time. The artist passed away in 2009. He left a compelling legacy behind him — the material we are exploring — a legacy that is undoubtedly of great value for the history of Petersburg art. 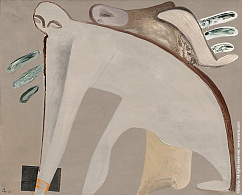