Savely Lapitsky was born in Leningrad in 1924. His father was a doctor and his mother retouched images in a famous photo studio. In 1938 young Savely won first place in a citywide art competition and his childhood was spent honing his talents at the Youth Art Centre. His path in life was almost predetermined but war came and scrambled those plans. Savely, weakened by dystrophy, was evacuated from the Blockade of Leningrad via the Road of Life across Lake Ladoga and settled in Miass a town in the Chelyabinsk Region, where he subsequently was educated at the School of Aviation Engineering. Afterwards, he enrolled in an aviation battalion that was at the forefront of fighting across Poland, Germany, Czechoslovakia and the Subcarpathia region. Lapitsky also participated in battles that led to the liberation of the victims of the Nazi Holocaust camps. In 1947 Lapitsky was admitted to the Faculty of Journalism and Media of the Leningrad State University, however, he never got as far as graduating because at the end of 1948, he was arrested in Lviv. In May 1949, on the anniversary of Victory Day, Lapitsky, a war veteran with numerous military awards, was sentenced to ten years of imprisonment in the camps and five-years suspension of his civil rights. Those years were spent across 13 different locations in four different prison districts, including 5 years spent around the Arctic Circle. During his life in the gulags, Lapitsky took part in building the Salekhard-Igarka Railway road that later became renowned as “The Road of Death". While imprisoned, Lapitsky used to paint portraits of his fellow prisoners but even that was later forbidden by the censorship committee because of the excessive similarity with the originals. Finally, on 18th of November 1954 Lapitsky was freed from his sentence and five years later, in 1959, was fully acquitted of all charges. In 1998 Savely Lapitsky was awarded the title of “Honoured Artist of the Russian Federation”. Lapitsky continued to work until the end of his life, which came in 2012. The artist had a natural gift, a keen eye, temperament, feeling and intuition enabling him to get to the heart of any matter. All those, multiplied by his incredible work ethic, enabled him to become a true master of the graphic arts in the broadest sense. He created photo collages, as well as political and advertising posters. Lapitsky’s works usually were parts of a topical series, cycles that were connected thematically. The largest cycle of such kind was dedicated to life in the GULAG. 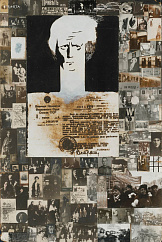