Yury Sychev was born in 1963 in Lermontov of the Stavropol region. Early in his life, Yury and a friend decided to enroll in a local art school, despite neither of them being able to draw. This was a life-changing event because when Yury first felt like an artist he realized his entire life would be devoted to art. The artist mentions that his professional career is greatly owed to a teacher from his provincial art school, Vyacheslav Zhuikov. This intuitive teacher spotted his talent and managed to set it on the right track. He encouraged Yury to go to the Nizhny Tagil Art School (famous for a strong department of applied art), and later to move to Saint-Petersburg.

In 1983, after completing his studies at the department of metalworking at the Nizhny Tagil Art School, the artist realized that painting was more important to him than making jewelry. His teacher supported his desire to continue his education and Sychev chose the Petersburg Academy of Arts without any hesitation. Saint-Petersburg became his favourite city, the place where, according to him, you can return after a long journey and feel at home. Such a touching attachment to the city can easily be seen in Sychev’s cityscapes, which are always bright, vivacious, and filled with passionate affection to the world around. The richness of colour is not seen as a decorative trick, but felt as a consequence of an over-saturation by mysterious and all-encompassing energies which he has managed to notice and render on canvas. The artist says about his cityscapes, ‘Piter is a very light, bright city and I always use bright colours to depict it. I like these violet shadows and yellow houses. I like a sunlit city, saturated with colours. Piter has rid itself of all these stereotypes of a ‘Dostoyevsky-city’. I don’t see the city as grey and murky, even when it is raining.’ This metamorphosis of an ordinary city into a magic dream; which, like any magic, demands solitude and peace – this is why Sychev doesn’t like painting from nature and prefers to work in his studio. His favourite materials are acrylic, pastel and colour crayons, because they allow him to render the images coming to his mind very quickly, and the combination of painting and graphic techniques always helps to produce a wonderful effect.

Veronese, Rembrandt, Kandinsky and all artists who have managed to create their own worlds which had not existed before are among Sychev’s favourite masters of the past. Sychev believes that the main goal for every artist is to achieve this ability to create a unique universe. 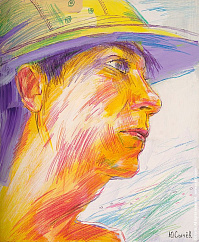