about the artist
Tatiana Tulicheva was born in 1963 in Leningrad, where she continues to work and pursue her artistic interest to this day. Having graduated from the Leningrad State University in 1986 in philology, she ademically focused upon aesthetics. This, in combination with her continuous affection for art ensured that she exhibited several of her own works whilst still studying and decided to pursue an artistic career shortly after graduation.
Tulicheva's consistent exploration of the Russian cityscape as well as the authentic Russian countryside allows her works to stand out from all others. Furthermore, her personal association with the 'Sterligov Group' ensured that academically, her works were exceptionally well received. Hence, alongside Zubkov and Tsvikunova, Tulicheva managed to create a tight and invaluable group of artist that aligned themselves upon the first avant-garde group within contemporary Russian art, thus the Malevich's suprematist circle.
Evidently, Tulicheva became a member of Saint-Petersburg Union of Artists in 1988 and has since guided several emerging artists towards this path also. Additionally, Tulicheva is also part of a greater association, the Russian Union of Artists, which further signifies her prominence.
Moreover, Tulicheva is also a crucial member of the "Pushkinskaya 10", which is an association of independent art, located in St. Petersburg. The association has precedence from after the establishment of the Soviet state and became infamous for being a safe house of artists of the subsequent generations, who were deemed as being 'degenerate', thus 'anti-establishment'. Its creation and maintenance through the charitable giving of those who were willing and able to support the avant-garde Russian art movement allowed artists to continue their indispensible social and political commentary.
show 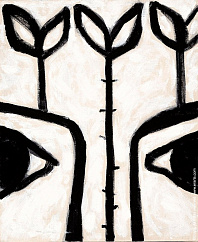