Georgy Ostretsov is a well-known Moscow artist, designer and an author of performances. In the 80s he was a member of a famous art community "Kindergarten", who based their squat in an abandoned kindergarten building. In 1988, Georgy moved to Paris, where he spent ten years, collaborated with such prominent designers as Jean-Charles Castelbajac and Jean-Paul Gaultier, and worked with Luc Besson. Since 1998 he lives and works in Moscow and cooperates with Marat Gelman Gallery. Ostretsov is a regular participatant of exhibitions at the Moscow Museum of Modern Art, Russian Museum, Tretyakov Gallery, and Saatshi Gallery in London. In 2009, he was one of the artists represented in Russian pavilion at the 53rd Venice Biennale, and in 2013, participated in the 5th Moscow Biennale of Contemporary Art. Recently Georgy Ostretsov has founded an art community VGLAZ: in his studio at the "Plastic" plant he works together with young artists and designers.

In his works Ostretsov applies to the aesthetics of comics. He creates original iconography in the spirit of mainstream comics. But unlike such American artists as Andy Warhol and Roy Lichtenstein, Ostretsov doesn't copy anybody else's illustrations and develops his own graphic story in the style of action comics.

One of the works by Georgy Ostretsov — "Stock Exchange" — is dedicated to the problem of market relations in the world of art. The author quotes the famous Warhol's "Dollar Sign" where the American artist mocks contemporary society, calling art a category of monetary relations. Following Warhol, Ostretsov continues this subject in his another work "Art for Sale", talking about counterfeit works in the art market (Venus de Milo is shown there with hands, which is a clear substitution of the famous image). "Art for Sale" belongs to the "New government" project that consists of a series of paintings and performances. The central visual image of the project is the mask of the new government. The series "Masks of New Government" was created in France together with Luc Besson, who then used them in his movie "Taxi".

"New government" is a project of utopian ideas. In the fictional world of Ostretsov there is no politics, as the new government has no face and exists in the system where elections are replaced with tests and where officials are only faceless doers of law. This world may seem serene and well thought-out until the author begins to portray all the depredations happenning under the auspices of the men in masks.

Using comics as one of the symbols of mass culture, Ostretsov touches the problem of correlation of personal and social, ironically revealing artificial canons and imposed stamps of the social behavior. 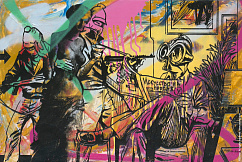 Georgy (Gosha) Ostretsov, b. in 1967 in Moscow, 1984 graduated from the Theatre Art School at the Bolshoi Theatre, lives and works in Moscow.