Anatoly Basin was born in a military family, in Leningrad in 1936.

He got solid technical education, graduated from Radio-Technical School and Architectural Department of Leningrad State Institute of Engineering and Architecture. He worked as an engineer and an architect for some time.

As an artist Basin experienced great influence of his teacher Osip Sidlin. He visited his studio in a Kapranov Palace of Culture from 1956 to 1972. Sidlin’s creative heritage is still being a subject of comprehension for Basin, as Anatoly Basin is not only an artist, but a keeper of certain tradition, memory keeper, myth-maker, and a narrator in some way.

For many years Basin stands by sombre colour treatment that calls light out of dark, creates special depth of colour space that turns to be not the imitation of the reality, but the reflection of painter’s consciousness. Line on Basin’s canvases snatches contours of female body or subjects of still-life out of darkness. Again and again Basin appeals to the same simple subject what happens not because the artist can’t manage with it. This is a solemn performance and at the same time deliberate human’s intrusion into the sacral spheres. The artist obsessively aspires to “see the voices” as Moses saw God on Mount Sinai.

Philosophical and even mystical quests are peculiar to Basin. “In another world I won’t be asked why I haven’t been Moses, I’ll be asked why I haven’t been Myself”. Basin quotes this citation without indicating the source in his small article in 1981. Intent look inside his own soul and searching for himself in his own works seem to interest the painter even more than painting. The artist willingly shares the results with the viewers, publishing from time to time texts full of quotations and linguistic studies.

Notwithstanding the inclination to theorize, Basin doesn’t make an impression of a severe wise man. He eagerly hands down his knowledge to his apprentices, while his private archive formed the basis for the well-known album called “Gazanevshchina”* published in Jerusalem and then in Saint Petersburg as well. 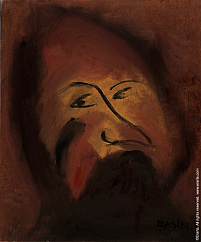 Nowadays lives and works in Saint Petersburg and Jerusalem.

Studied painting in O. Sidlin’s studio in Kapranov Palace of Culture (1956-1972). Specialty: an architect, an engineer.