Arthur Molev was born in St. Petersburg in 1969. His multifaceted creative works include painting, poetry, animation and music. Molev is known for his close cooperation with a famous Petersburg rock band, Auktyon, that he assisted as an artist.

There is a temptation to view Molev’s bright paintings which are charged with the joy of life as simple children’s drawings. His unskillfully drawn, as it may seem at a first glance, angular figures of people and briefly contoured images of animals are reminiscent of ancient rock paintings or sketches from school notebooks. In fact, the artist has accomplished continuous studies (although with many breaks) in the Mukhina Art School. More importantly, the Petersburg panting tradition has made a significant and noticeable influence on his art. As a devoted disciple of Anatoly Zaslavsky, Molev continued developing the ideas of Petersburg expressionism by adding his unique and inimitable note of naïve art. The light childishness and sincerity of his paintings extend the imagery of the Petersburg landscape with his scintillating hot colour palette. Customary city views have an acquired light optimistic spontaneity from under his brush.

Currently, Molev lives in Holland and his glowing canvases feature cities that he has visited such as Amsterdam, Utrecht, Paris and Jerusalem. 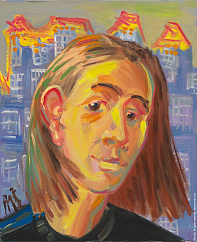